The favorably received parody of the Lost series, Wrecked has been already revived for the sophomore cycle that is supposed to include ten episodes as well. The premiere date is not to be exposed in the near future. Let’s wait for it next year, stay tuned for plot details, and cast changes.

Hit Parody of the Lost Series

Wrecked is a new series on the TBC channel that serves as a mockery of the flagship serial entitled as Lost. Thus, it is a mystery thriller comedy that won’t let anyone get bored. 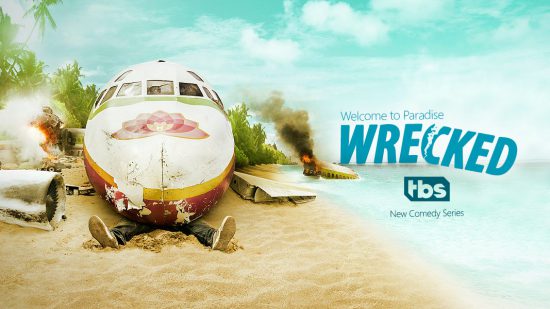 The freshman installment is the latest one so far composed of 10 episodes. The debut is dated back to June 14, 2016. Among the creators, we should mark out the leaders named Jordan and Justin Shipley. The team of executives includes the names of James Griffiths and Moses Port. The project is a joint venture of Shipley Productions and TBS Productions. The acting cast contains the names of Zach Cregger, Asif Ali, Ally Maki, Ginger Gonzago, Brooke Dillman, Will Greenberg, Rhys Darby, Jessica Lowe, Brian Sacca, and James Scott.

Well, the concept is practically the same as in the original thriller series yet developed in an extraordinary, well, amusing way.
A group of people has happened to outlive the plane crash and find themselves on a mysterious island. They should survive facing the ghosts from their past. How will they manage to find answers and engage in soul-searching?
In each of the 10 parts of the freshman installment, an amazing discovery that may change everything they have found out about their predicament is shown.

The series has been received with flying flowers. The viewership constituted about 1.5 million watchers per episode in general during the broadcast on the TBS channel. Meanwhile, on other platforms, it is garnering now, even more, achieving the point of 5 million viewers per episode. The score on IMDb is more than average – 6.8 points out of 10. On other aggregator websites, it is a little bit lower – 56/100 on Metacritic and 50% on Rotten Tomatoes. Despite this, we should affirm that the parody show is worth its continuation. How have you personally received the project? Share your impressions from viewing this parody in the comments below!

Renewal for the Sophomore Chapter

The first installment has become much prosperous for the TBS channel. This can lead only to one thing – yes, it is the renewal for the following chapter. Without hesitating as for this matter, the producers have made an order for the sophomore cycle that is expected to contain 10 episodes as well. The premiere is scheduled for 2017 yet the Wrecked season 2 release date stays unknown so far. Frankly speaking, we should not be under the illusion that it will be exposed this year. The predicted appearance can be only getting closer to the end of spring 2017.
Nevertheless, let’s stay tuned for other specifics on the future installment of the parody, for plot details, for instance.