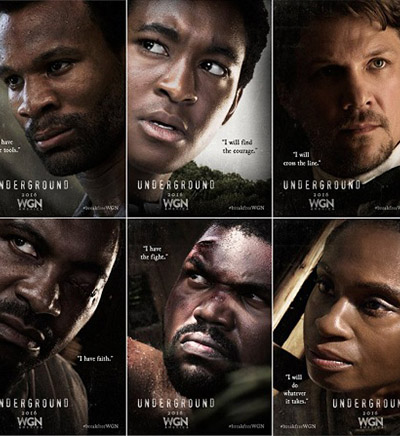 If you always wanted to watch another great historical drama that was close by spirit and theme to the recent Academy Awards’ winner 12 Years a Slave, then you should definitely take a closer look at the upcoming Underground season 1 premiere.

WGN America channel was scheduled for Underground season 1 release date on March 9, 2016. This will be one of the first few original scripted TV shows.

Along with Titans and Outsiders Underground season 1 destiny will depend strictly on the audience ratings. It is a sort of the network’s experiment.

The new drama stars Aldis Hodge (Leverage), Jessica de Gouw and Jurnee Smollett-Bell among others, mostly non so famous actors. Also the cast will include Christopher Meloni who is famous by his roles in Law and Order: SVU and OZ TV series.

In Underground season 1 of the channel WGN America you will see the historic events unfold before the American Civil War, in the center of the plot is the work of a secret organization dedicated to the system of liberating slaves from slave states known as the Underground Railroad.

The main characters were slaves in the past. Each of the masters treated them cruelly and was the main cause for the slaves’ intention to escape. The initiator of this slave movement is Noah. In front of him is not an easy task to bring a group of people to go before their masters will catch them.