A BBC produced drama TV series. The original idea was taken out of Yellow Peppers TV show. Peter Bowker, the scriptwriter worked in cooperation with Keshet – the one dealing with producing of Yellow Peppers, the Israeli series. Bowker was willing to create the remake of the project, but leave the original storyline. Bowker used his teacher’s experienced and ceated a brand new project on the base of Israeli one.
Filming started in October 2015.

The series is about a boy with a condition. He’s five years old and he’s got autism. The series follows family’s ups and downs. The series started finished in March 2016. The first season was made up of six episodes. The project was renewed; you can scroll down for more info if you’ve already seen the show looking for more.

The central character of this show is a 5-year-old Joe Hughes. From his early age, he used to demonstrate strange attitude to communication with other people. He isn’t interested in society surrounding him, spending most of the time playing rock music the way no one can hear him – listening to himself through special headphones. His knowledge about the songs he performs and listens to is incredible – he remembers every single word of every song.
His family is sincerely worried understanding that Joe can’t be a part of anyone’s company. Children of his age don’t express any interest in him. Alison and Paul, his mom and dad, decide to get him to hospital to discover the roots of his communication problems. Almost all the members of the family (except for the parents) try to interfere with Joe’s condition attempting to take measures. At first, everyone thought that Joe had problems with hearing, but later it turned out (and it was officially proved) that the boy has autism.
Later the show switches to the life of dysfunctional family consisting of Rebecca, Eddie and Nicola. They have to experience troublesome situations and constant mutual misunderstanding, but they manage to cope with it. 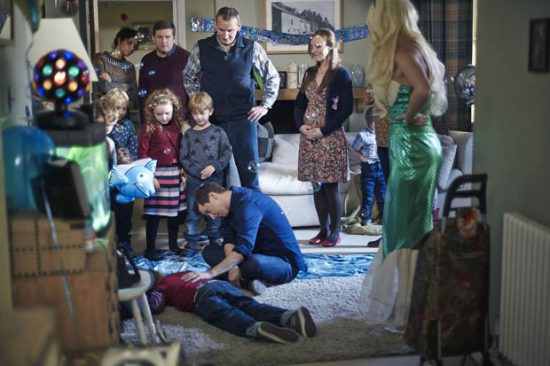 The feedback was huge and the show was watched by about 6 million people. The audience’s reaction was mostly positive. Of course, dealing with autism on TV may seem cynical for some people, but such projects can teach us a lot of things.

On the 26th of May 2016, the BBC made an official announcement about the continuation of the series. We’re likely to watch the second season of the project in 2017, cause The A Word had been commissioned.