How to teach children if your life needs fixing, as many challenges are in front of you and you just cannot cope with all of them at once? In fact, it is the very idea of the new series on TV Land titled shortly as Teachers. It is a comedy that serves to display all problems of a school staff as they are in the most awkward and hilarious ways.

Production and Broadcast Issues: Who are to Resolve Them?

The American comedy in the core, Teachers has its background in the shape of an eponymous web series by the Katydids, a 6-member female improvisation group. These charming ladies gathered and wrote the script for the given series and decided to perform the lead roles in it also. 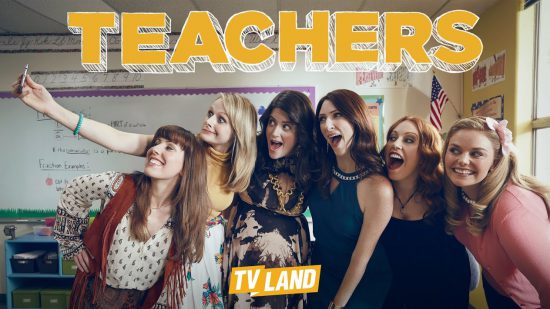 The project is a newcomer on TV Land. Only the first season has been given a winter start this year following the premiere of the special first episode in December 2015. The whole amount of episodes constitutes 10 parts. The second chapter is already a confirmed one. Well, we may expect its premiere next year.
As for the productions issues, they are resolved by two companies – Martel & Roberts Productions and TV Land Original Productions. The team of executives includes the names of Ian Roberts, Jay Martel, and Matt Miller.

The main heroines of the story are teachers at one elementary school. Their personal lives are overloaded with troubles. How can they serve as good examples for their students if they fail to act like proper role models in their out-of-work life? It is uneasy but they should do this resolving their problems and learn lessons from many uncomfortable situations that come to light on our screens in the most awkward and hilarious ways.

Feedback from the Audience: the Situation is not so Perfect

Let’s start with the pleasing fact that the series has come to be to the likings of critics. The quality of the scenario (though some critics consider it a bit half-baked), as well as the very performance of these six magnificent ladies, are the apparent advantages of the story.
As for the number of watchers tuning in during the release of regularly launched episodes, it is not so much inspiring. The peak is related to 0.9 million viewers. Well, it is average yet does it suffice for creating the following seasons? What are chances of renewal? Can we hope for another at least one more installment?

You can sigh with relief, as the developers have thought it over and now we have a revival confirmation. Thus, there is nothing to worry about now. A quirky comedy is given a second chance to improve the situation with ratings. We are almost sure that the ladies will cope with this task, as the amount of episodes has been officially extended to twenty parts.
The Teachers season 2 release date is around the corner. This makes us monitor the situation closely. As soon as something is announced, we will notify you right off the bat.