In May 2015 Bounce TV made an official announcement about the upcoming original drama series. The premiere was set for 2016. Saints & Sinners became one of the most popular American TV projects lately. It’s  a soap opera consisting of 8 episodes in total. The producers aren’t planning to cut the project due to the positive reviews and a number of devoted fans it managed to attract. It became a real hit for Bounce TV striking religion and crime plot elements. 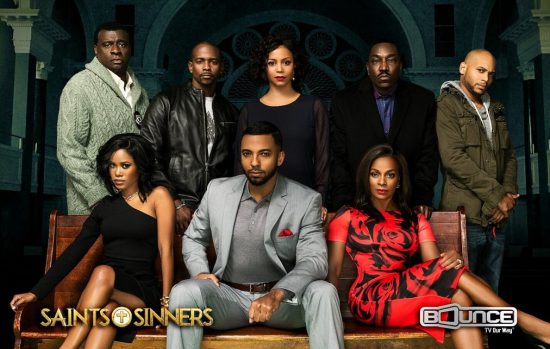 The plotline of Saints & Sinners involves several generations. The action of the series concentrates in Greater Hope Baptist Church and all those who joined its community. The community is like a big family with its rules and religious traditions. However, every family has its skeletons to hide and this one is not an exception. People here are tempted. Tempted by lust, hatred, greed, horrific, destructive desires and a mass of other immoral things. Loyalty is almost dead – it’s like a mask serving to hide the deepest and the darkest secrets.
A prodigal son returns to his church and rets to know that a terrible crime has happened. This shocking mystery is going to be revealed all along with other puzzles of the community. Slowly revealing mysteries are going to shatter and ruin the lives of all members of the community. The police does its best to discover the deep down mysteries and the shocking truth about the murder is finally revealed in the last episode.

At the beginning, the reviews were quite mixed due to the format of the series combining religion and crime, love and hatred, loyalty and lust. It was a risky project, but it was worth the risk taken.

The very first episode of Saints & Sinners released on the 6th of March 2016 got more than a million viewers being a real breakthrough for Bounce TV. In April this year the show was renewed for season 2, but the release date is yet to be scheduled for the beginning of 2017.