Rovers is produced in the United Kingdom. That’s a comedy TV series released in May of 2016. One season was released with 6 episodes in total. The creator of the script and the author of the original idea is Joe Wilkinson. The director is Craig Cash. The filming was mostly done in Manchester. The action takes place in one of the oldest clubs in England, Established in 1884. It’s called Redbridge Rovers F.C. However, his age doesn’t add it any positive reputation points – it’s one of the worst places in the area. That’s a non-league social football club (totally fictional) full of a number of hilarious characters and visitors.

The place, where the action of Rovers is set was founded in 1884. It’s a football club – a fictional club of one of the oldest fictional football teams in England called Redbridge Rovers. Despite the age, the team is not as popular and successful as it had been before. They no more play in front of the crowds of fans. This team of amateur footballers now plays in front of 27 people in total somewhere on the Spartan ground situated not far from a rubbish dump two miles away from a dirt track.
However, these people are still popular among the locals and even have a collection of fans. Every week the fans watch their favorite players’ matches. Then they gather in a local social football club to chat about the latest game, drinking beer with pork scratchings. The place is owned by Doreen – a hardworking, loose-lipped woman. She’s famous for her meat raffles that have nearly become a legend of the area. Probably, it’s the only thing that keeps the visitors going through the doors of the club. Pete Mott is always to ready facts, figures and statistics of the team with anyone who asks for it. He often meets with Tel, his faithful friend, but tell surprises him with a very peculiar secret of his own…

The main characters are: 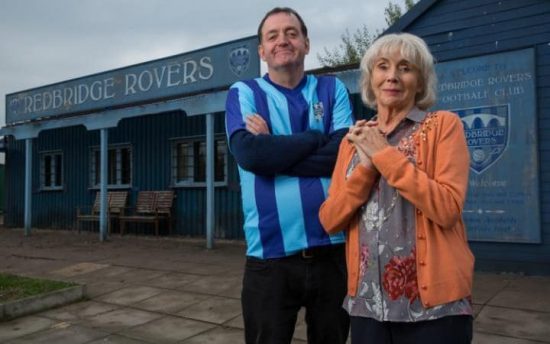 The authors of the script, Wilkinson and Earl, portray two characters that appear in the very first episode of the series named Lee and Bruce.

The fans feel like the series deserves more airtime. The comedy is truly down-to-earth, what makes it attractive for a large amount of viewers. Season 1 finished on the 28th of June and since that time there hasn’t been any official news on the renewal of Rovers. The status of the series is unknown yet.