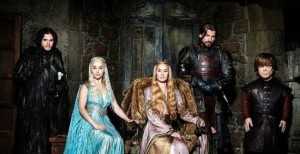 Many fans have already enjoyed the final episode of the 4th of the fantasy TV show “The Game of Thrones”, but what will happen next?  What is the release date for Game of Thrones, season 5? Will the sequel be as good as previous seasons, bringing the same joyful experience to watch? We don’t know much about the new 5th season at the moment, but there are actors who claimed its release and this fact made the fans very hopeful about the upcoming episodes of their favorite series.  The show’s actress Nathalie Emmanuel (who plays a young former slave assistant of Daenerys Targaryen) and actor Michiel Huisman who debuted in the fourth season, playing the charming warrior Dar Naharis claimed the 5th season will be as interesting as previous 4 installments. It has become previously known that the fifth season will be an adaptation of the fourth novel "A Feast for Crows" of the series "A Song of Ice and Fire" by George R.R. Martin. It’s worth mentioning that the HBO channel’s representatives and the writer George Martin have mentioned few times about possible difficulties they have to face during the shooting of the 5th and 6th seasons. A HBO representative has told recently: "The series has reached a point where the number of valid characters became so enormous that can crack at the seams, if we try to include into the series’ storylines more characters from the books. It is also problematic from the financial appoint of view. We do not want to jump between multiple characters and locations. It would be risky – we can lose the audience’s attention. It’s time to reduce the population in the series". Also many critics talk about the problem with the pace of writing new books and the speed of filming of the new season of the TV show. Representatives of the channel hope that this problem won’t become crucial and filming will be continued in a habitual order. The writer himself does not see any problem with such pace, as he said many times in interviews. According to the latest news, script writers David Benioff and Dan Weiss have already signed a contract with HBO for at least 2 more seasons – 5th and 6th ones. The HBO President Michael Lombardo has recently commented in the interview to EW, that this pair is too valuable to let them go – "I’ve read a lot of scripts. David and Dan are not just good, they are exceptional writers. Their scripts are so dazzling, they look better than anything I’ve ever read". 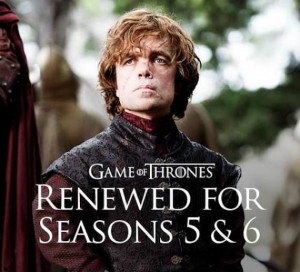 Added: 08/04/2014, after the stunning rankings of the first episode of the fourth season that aired on April, 6, appeared the official information from HBO that the television series to extend to the fifth and sixth seasons! The intriguing finale of the 4th season again made the audience to ask new questions the answers to which they will have to wait almost for a year …. Where do Tyrion and Aria sail? What will happen with the white walkers if the winter is coming? As HBO claims, the 10th episode of the 4th season (finale) attracted 7.1 million viewers, which is 29% higher than the third season finale’s results. Is the release date for the Game of Thrones’ 5th season – spring 2015? Do you like this show? Who is your favorite character? What can you add or comment?