The fall 2015 will be a joyous period for the fans of Faking It. The 3rd season has been confirmed by the show’s creators, along with the MTV channel representatives. It has been decided upon making another 10 episodes following the relative success of Faking It: season 2. It is yet to wonder how the story with the Falsification series sequel will turn out. 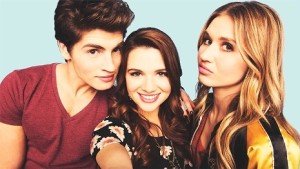 The focal point of the TV show is the story of two girls who are best friends. For the sake of popularity among guys, they pretend to be a lesbian couple. This game, while having started as innocent, brings real feelings to the surface. So the question arises: are they really faking it?
The show was largely popular in 2013. It has some nice actors starring in it. The protagonist roles were given to Rita Wolf and Katie Stevens, and other cast members include Michael J. Willett, Gregg Sulkin, and Bailey Buntain.
The second season was split in two patches with 10 episodes each. The first part of the second season was released on September 23, and the remaining 10 were aired after a short break. Just like the previous second season, the following one will be out in fall 2015.
The fans can expect the third season of Faking It in autumn 2015.
How do you think the events in the third season will turn out?