Not all of the new humorous projects turn out to become hits. Some of them get forgotten right after the last episode is released. Camping series consisted of 6 episodes. It was aired on Sky 1 in April of 2016. It didn’t become popular, but what if the producers plan to reload the project and give it a fresh start? Let’s have a brief look on Camping, its characters and plot.

Be ready for spoilers if you haven’t seen the projects or if you’ve just started to watch it!

Fiona, one of the main characters, a bossy, neurotic, homophobic woman, is planning to have a nice celebration of her husband’s 50th birthday. She decides that the best way to do that will be a camping weekend. She also invites Kerry and Adam – their family’s friends. But all of her perfect plans get ruined when Tom and Fay arrive. Tom was recently divorced and Fay is his new partner. She’s absolutely uninhibited with her highly provocative behavior.
Somehow all of them manage to get into the weekend. They go to the beach with Fiona and Robin’s son named Archie. Kerry doesn’t stop saying that her husband Adam is addicted to alcohol and everyone should be careful with him.
Fiona is planning to visit Monkey World. However things go wrong and she gets extremely furious (as usual) because Tom and Fay get Robin to a fishing trip – that was their present for his birthday. Fiona goes to watch the monkeys alone while Robin, Adam and Kerry together with the children go to the sea and get stuck in a real disaster. Tom and Fay are trying to get some drugs.
Robin wants and tries to ignite sex life with his wife again. Tom get unpredictable news from his former wife living far away from him.
The celebration continues with a party filled with a mess of awkward events. The festivities are constantly interrupted by mutual clashes of the characters because of constant flirtations with Fay. When Fay’s drug stash is found the things get even more complicated mixed together with drug abuse and uncontrolled social encounters… 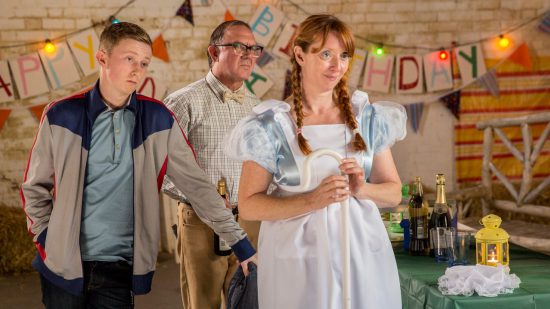 The original name of the series was "Camping". For some reason the creator of it decided to concentrate more on the character and renamed it into "Robin’s Test". But later, Julia Davis changed her decision again and decided to get back to the original title, because its simplicity made it perfect.

The audience of approximately 71.000 watched the first season. IMDb gave Camping 7.9 points out of 10, however the viewers’ opinions are mostly negative. Some people think that dark humor makes the series a hilarious comedy, however, most part of those who has watched Camping stick to an opinion that it’s shallow and embarrassing at a time. The general impressions is dreadful.
We don’t know what to wait in the future, so stay tuned not to miss the news about the possible renewal of Camping next year.