Netflix is going to release a television adaptation of the Australian children’s books about the adventures of Bottersnikes and Gumbles. The animation will be broadcasted on Netflix in 2016.

Bottersnikes and Gumbles are fictional animals from the series of books for children by Australian writer S. A. Wakefield. The appearance of the creatures was invented by the illustrator Desmond Digby. Altogether the author created four books between 70s and 80s of the previous century. The Netflix network takes on an animated adaptation series, appearing on the screen in 2016. 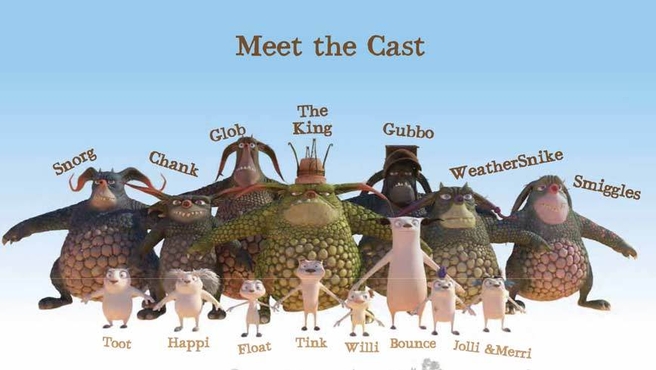 The creators are David Webster and Patrick Edgerton from Cheeky Little Media Pty, Darren Price from Limited Mighty Nice.
In the imaginative world there live three Gumble friends – Tink, Bounce and Willi. These creatures can stretch and flatten themselves in the most incredible forms without harm. They are incredibly sweet, passing their time by goofing around and doing crazy, extremely funny things in their valley. They are ticklish because they can’t stop laughing.
Along with Gumble, there are Bottersnikes who are totally killjoy. You could never imagine more ugly, lazy, mean and stinky creator than these. They are eating hodge podge like stuff from mattress and rusty nails as dessert. There is nothing they enjoy better than making Gumbles work for them. Bottersnikes’ appearance reflects their bad-nature. The ears become red when they get angry and it happens all the time. The skin is green and wrinkled, noses are like cheese-grater. Bottersnikes fear most the water, because they tighten and need to be hang out to get dry.

The main conflict spikes between friendly, cheerful and diligent Gumbles and indolent, harmful and malicious Bottersnikes. The background for creating the TV series is a growing interest in environmental matter. Two characters represent two opposite attitudes toward nature – one who cares about the nature and another who harms it. The serious topic is diluted with good humor, tomfoolery, humorous situations and antics.

The Seven Network has the first run of the animation and free to air right in Australia. CBBC has purchased in advance the rights to air in UK. Netflix took the rest territory so it could use the terrestrial broadcasters.
Darren Price chose the books and engaged the Cheeky Little Media founded by Webster and Edgerton in 2013.
Price is responsible for the visual design elements and co-direct with David Webster. The head of the writing team is Jen Upton from the UK. The writers are predominantly from England and one-third – from Australia.

The voice actors will be mostly Australian and some of them are from the UK. The license fees from Seven, Netflix and the BBC companies provide funding for the production.
Netflix will entertain the children’s viewers with good educating animated series in 2016.