It has been recently confirmed that the fourth season of the Banshee TV series will happen.
Banshee is a criminal drama series telling a story of a man who was once a con, and currently is a sheriff of a small town with a curious name, Banshee. The sheriff, whose name is Lucas Hood, has become popular among the viewers – the show gathered about 550,000 of them in front of their screens at home. The 3rd season of the series started in January 2015 on the Cinemax channel. 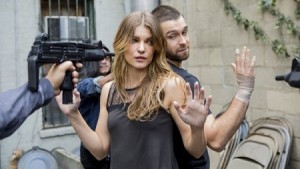 Due to the good ratings (especially if we compare them to the stats on the 1st and 2nd seasons), it was decided to make another three seasons. Jonathan Tropper (the show’s Executive Producer) himself stated this back in August 2014. Hopefully, the ratings will keep up, and Cinemax will be willing to continue broadcasting the show.
We will not, however, speculate on the Banshee: Season 5 release date, and will just say that the fourth season is planned to come out in January 2016. Location is the same a before: your home, Cinemax channel.
While Banshee: season 4 will be released in January next year on the TV, its Blu-ray copy will not be available until the spring 2016, and its DVD copy even later, in summer that year.