The popular American horror TV show, American Horror Story, will present its 5th season soon. During the upcoming season’s announcement, the writer Ryan Murphy said he already had certain ideas which would set the tone of the season 5. The show, just like always, will be aired on the FX channel.
In an interview for the EW portal, Ryan Murphy shared his prospects regarding the fifth season. It turns out that the new one may be a sequel to the fourth season. As we all know, the latest set of episodes was united by the theme of freak shows. It’s very likely that the new season will dwell on this topic. On the other hand, the show’s writer said he would want the fifth season be something completely different from its predecessors. Having all that in mind, we can just keep guessing about what kind of a classical American horror is expecting us. 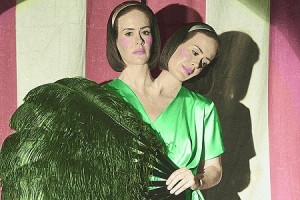 Those who are behind the TV show desperately want the actress Jessica Lange to play a part in the story. She has earned the series a good reputation, and her acting is much valued. While Ms. Lange has made an announcement about her planning to leave the project, the creators, including the abovementioned Ryan Murphy, are doing all they can to convince her stay. Moreover, it seems that they are all working on a new sophisticated character for Ms. Lange in particular to make her interested and to, so to speak, make her an offer she can’t refuse. All in all, she deserves this kind of personal treatment.
There is no need to wait till the FX channel confirms the fifth season of American Horror Story. The story with Jessica Lange may be kept surprise for a while too. All the fans can patiently wait for the new 13 episodes which, as they know since October 2014, they will definitely see.
While the creators keep avoiding direct answers regarding the show, we can try to make something out of clues. Such hints are provided by the authors in every season, and they serve as innuendoes on what is going to happen in the next chapter. In the American Horror Story: The Freak Show, there were numerous cylinders appearing on different coffee cups. As the chief writer stated, those objects are indeed significant and can reveal a bit the theme of the next season. It might be some reference to the “Operation Cylinder” that unfolded in 1953 in Alabama when chemical weapons were supposedly tested on humans by the U.S. military.
The upcoming fifth season of an incredibly popular TV show American Horror Story will be aired on the FX channel starting October 2015.
It will then be out on different carriers, such as DVD (early 2016) and Blu-ray (middle 2016).
What do you think about the upcoming American Horror Story? Do you have any idea on what the new chapter’s theme will be?