The second season of the Almost Royal TV series has been confirmed, which is absolutely a good news for everyone who liked the first patch of episodes. Now you can cease holding your breath and relax, as the UK TV show will be officially extended by at least one more season due to the good ratings and its creators’ (in cooperation with the BBC channel) good will.
As we all remember, the TV show’s protagonists are members of the Carlton family who appear to be some kind of distant relatives to the Queen – thus the name, Almost Royal. 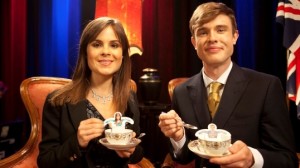 The series is centered around the experience of the Carlton children, George (played by Ed Gamble) and Poppy (played by Amy Hoggart), who take a trip to the US. The whole adventure is filmed in a form of a reality show. Everything is done professionally, so that an average viewer will not suspect that it’s a feature series. Besides, the idea itself is to provide an insight into the now ordinary life of the two nobel offsprings deprived of the usual comfort.
The second season of the Almost Royal TV show is scheduled for somewhere in 2015. If you liked the series’ first set of episodes, you might want to watch the follow-up.