The series is again broadcasted on MTV. The latest season has been giving many other important issues for thinking them over to us. However, what is the fate of the next chapter? Let’s discuss this.

This reality series was given start yet in 2009 when the title was even simpler – just Teen Mom. OG (Original Girls) has been added since the release of the fifth installment. At that time, in 2015 exactly, the reincarnation of the project took place after the long break having been given a start in 2012. 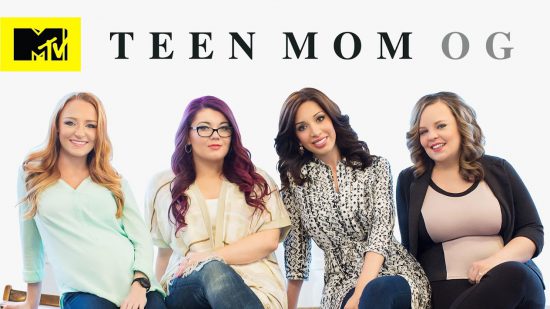 The fifth installment premiere is dated back to March 2015 specifically. The latest sixth debut has been held recently – in August 2016.
The team of creators of the TV show comes to be spearheaded by Lauren Dolgen while 11th Street Productions is behind the whole fabrication.

We are now set to refresh your memories, as you should remember the MTV show entitled 16 and Pregnant. This series is the spinoff of it actually. The series follows as they experience their first years of motherhood.
Growing up together with their kids, they are no more teenagers but they are anxious to discuss all those issues and challenges that have appeared at those times.
Each of them has her own case that should be described in detail for more motivation to be delivered to the audience consisting mainly of young moms.
Now, their course of life is more or less stable but how much effort it has taken to make it so, only they can give a reply.
Macy and Amber are, for example, about to get married, while Catelynn, married in 2015 faces depression issues. At the same time, Farrah opens her own undertaking – the frozen yogurt shop near Austin.

This MTV project is a popular one indeed for the certain reasons. First of all, it is about the portion of motivation delivered. Teenagers and young adults who face the challenge of becoming parents need useful help in both material and moral aspects. The moral side of the assistance is the thing that the series provides them with.
Thus, the reception of the TV show is warm since it is of great importance. But what are the concrete rating numbers?
The average viewership constitutes 1.5 million watchers. That is great indeed and supplies us with the assurance that other following season will be given the start in the future.

It is so much important that such social projects are under development. Many significant aspects of the troubles in the nowadays society are discussed. To raise awareness and to give a helping hand to those who need it is the purpose of this given show.
To make a long story short, we should say that the story deserves its future renewals and hope they will take place. The fate of the seventh season is so far unknown, as well as the Teen Mom OG season 7 release date. Subscribe to us in order to be notified as soon as info appears.