Blue Collar Millionaires is a documentary TV series created and released in the USA. The release is carried out by CNBC channel. Every episode of the series follows blue collars from different places in the USA. They’ve managed to realize their dreams and to become millionaires. The show proves that it’s not that easy as it seems, but yet, it demonstrates that it’s possible for everyone. If you’re patient enough and if you’re ready for numerous life challenges, you’ll break through it and finally become who you wish to be. The first season started airing in January of 2015. The production matters are carried out by 495 Productions. Blue Collar Millionaires season 3 release date hasn’t been announced yet. However, it’s evident that the show isn’t over and the producers have no plans about the cancellation.

Every new episode of Blue Collar Millionaires documentary TV series follows people who managed to get a fortune while working as hard as it’s possible getting rich by making their hand actually dirty. They rolled up their sleeves to make millions out of nothing… They live in palatial mansions and share their impressions about their everyday life comparing it to the one they had before they became millionaires.
You should pay attention to the fact that the participants of the project has nothing to do with stereotypical millionaires. The ear their fortunes by learning new things, doing hard work and using their talents pushing their strength and persistence to the limit. They managed to get a lot farther than they thought they would. Now they use their millions for lots of things having much fun and sharing their impression with the TV viewers. 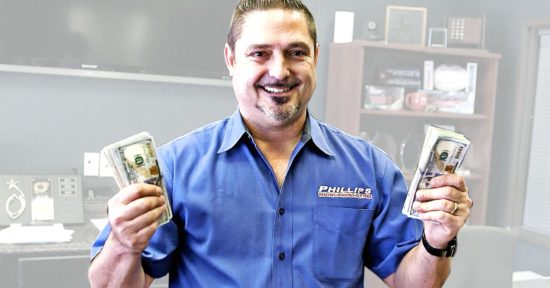 The cast is huge and the only thing you can do to have a first impression is to watch several episodes of the show online. You need to remember, that each participant of the show started almost on his or her own doing whatever possible to become rich. For example, one of the participants of the show is named Josey Parks. Let’s have a brief look at him.
At 26 Josey he already had his personal business. He was growing together with his siblings and his father died when he was two. His mom was an owner of a print shop. Josey had to work hard since childhood. His first job was installing roofs. At 19, he decided to take a risk and start his business. Fortunately, he succeeded. He managed to get $50,000 in 35 days. In 2014, his business got about $23 million.

There’s no official info proving that the show will continue broadcasting in its third season. When more info appears about Blue Collar Millionaires 3rd season release date, you’ll immediately be notified. Keep in touch with our latest updates and don’t forget to subscribe in order not to miss relevant info about your favorite TV shows. Don’t forget that the comments section is waiting for your thoughts, ideas, and opinions about the show. Willing to see the continuation? Why?