The new part a favorite story about the energetic and funny squirrel and the rat which has already become popular will soon reappear on all screens. The creators of an animated film The Nut Job 2: Nutty by Nature are planning to present their new project soon: the official release date is scheduled for August 18, 2017. The audience will see new adventures of two animals in the city, where they will meet a lot of different adventures, entertainment and, of course, some dangers. The new cartoon will sure contain many funny episodes and scenes, so the public is looking forward to release the film and believes that the second part will be not less interesting than the previous one.

The director of the cartoon is Cal Brunker, who is working together with a few scriptwriters making the plot of the story interesting for both children and adults. These people are:

There is one more crew in the film, the crew of producers who are doing their best for the story to be released as soon as possible and to be known by a large number of viewers. Among these people are worth noting the following ones:

Such a great number of Asian filmmakers may be explained by a joint work of three countries: the USA, Canada and South Korea. The main distributor of The Nut Job 2: Nutty by Nature is Open Road Films. 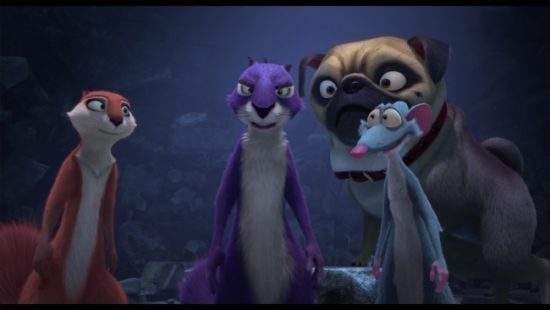 Surly and Buddy, funny squirrel and rat, are again in the city. As before, the friends hunt for nuts, bringing usual residents a lot of troubles and inconvenience. But suddenly the animals attack on the trail of real criminals, and by a strange coincidence become heroes and common favorites. What adventures are waiting for the animals this time? Whether they will cope with all the dangers? Very soon the fans of these adorable creatures will learn the answers to all their questions, because the debut is scheduled for the nearest future.
The voices of cartoon characters belong to the following people:

The Premiere Date and Upcoming Interest

No long ago, in the December of 2016 the authors announced that the movie is set for August 18, 2017. This date is likely to be finale and the release won’t be postponed. The public interest to the cinema is very big, so stay tuned to check if the creators have managed to make a good cartoon and get all the facts about the film and its cast.