An excellent animation comedy is being awaited by all viewers in the summer of 2017. We are talking about the project Captain Underpants: The First Epic Movie, a film about two mischievous children who have managed to fulfill the dream of a plurality of pupils to subdue the principal to their will. Probably, an upcoming humorous film will be appreciated not only by children, but also by adults and fans of funny family cartoons. An exact date of the premiere is already known, because the filmmakers have recently reported that their movie will be released on June 2, 2017. Soon the whole world will see this comedy, but now it still is remained waiting for the debut and hope that the creators of the cartoon will not fail and their product will really be worthwhile.

The story of the future animated film is directed by David Soren, a Canadian animator, who together with his colleague-scriptwriter Nicholas Stoller has developed the idea of Dav Pilkey’s book turning it into a feature-length cartoon. 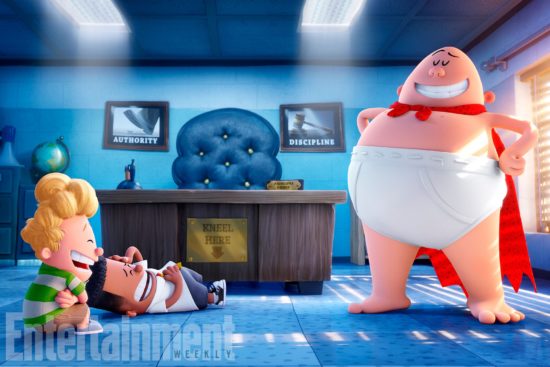 The producers who are responsible for the promoting of the movie and its popularity and recognition among the public are the following ones:

One of the companies producing Captain Underpants: The First Epic Movie is the world famous DreamWorks Animation. The distributor of the cinema is not less popular 20th Century Fox.

Two fellow scholars, known for their constant jokes and gags, perform an unusual trick. They somehow miraculously manage to hypnotize the principal of their school, thereby turning it into a favorite hero of comics – Captain Underpants. Perhaps the other pupils of the school will be grateful to them, because a new director is an exact opposite of the previous one. The whole cartoon is filled with jokes, and its dynamic and a kind story may be to the liking of all the viewers.
The cast of the movie are well-known actors whose voices are used in the cartoon. These people are:

This animated carton has great chances to gain viewers’ recognition due to its unusual plot and vivid characters. The date of release is scheduled for June 2, 2017, and these seem to be unchangeable. Stay tuned for getting further information and checking out authors’ promise concerning all the peculiarities of Captain Underpants: The First Epic Movie.