This summer we are going to watch the TV adaptation of the widely known and beloved manga under the title “Orange”.  The release of the manga chapters was over in a previous year. In order not to upset the manga fans, the decision to create the TV version was made. Let’s hope that it will be interesting as the novel itself.

Short review of a franchise 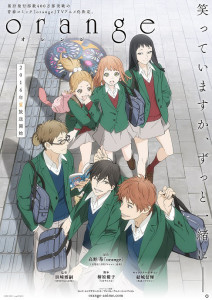 Orange is reckoned to be a romantic manga created by Ichigo Takano. The first issue was released in 2012 in one magazine and later in another (titled “Monthly Action” by the way).
The English versions appeared due to the international online community named Crunchyroll.
In December 2015, the first film adaptation in the genre of action came to see the light.
Hiroshi Hamasaki is given the role of a chief director of the project. Yuko Kakihara is considered to be the main member of the writing teams responsible for the script. Nobuteru Yuki is to work on the character designs.

One fine day, Naho Takamiya gets to be sent a letter from her future herself. The sender comes to be 10 older than Naho now. In the letter, the certain events of the day are described in detail so there is no doubting that the letter is a kind of an evil joke. For example, it is noted that one student whose name is Kakeru Naruse has been brought to her class.
The Naho from ten years later writes that she has many regrets, and she is willing to rectify everything by means of assuring the Naho from the past that she can act in a right way in order to prevent the future events from happening. Particularly, it goes about Kakeru.
The most surprising thing is that she finds out that ten years later, Kakeru will henceforward be willing to stay with them. Future Naho advises her to keep the guard over him.
How can Naho prevent from being without Kakeru in the future? At least, she has to take some preventive actions so she wouldn’t have the same regrets as Naho from the future. How can she cope with this difficult task? What actions, in particular, must she take? In order to answer these questions, we should stay tuned and mustn’t miss the debut day.
And what is about Kakeru? From what should Naho save a young boy? Let’s make the situation clear.
Naruse Kakeru was transferred from Tokyo school to the class of Naho Takamiya. On the first day of classes, his mother asked him to return home right after classes since she had to visit a doctor with him. However, a boy did not obey. After school, she went with Naho and her friends. That same day his mother committed suicide. Being beside himself with such a grief, Kakeru commits suicide, making everyone reckon that it was just an accident.

The television adaptation in the form of series is given the green light. If to believe the Monthly Action magazine, we are to be gladdened by the first season very soon. The Orange Release Date is appointed for March 25, 2016. Thus, there is now the little choice but to wait for the premiere day.