Non Non Biyori Repeat is so popular among the fans because of the light atmosphere so beautifully created in the first season. However, the viewers understand that this series is a lot more than simply atmospheric. The word "Repeat" added to the original title is a simple, but affective way to sign the sequel. The creators decided to use a special approach to the second season of the anime creating a stronger connection with the viewer. The second season of Non Non Biyori called Non Non Biyori Repeat was released on the 6th of July 2015. What about the continuation of this pastoral sequel? 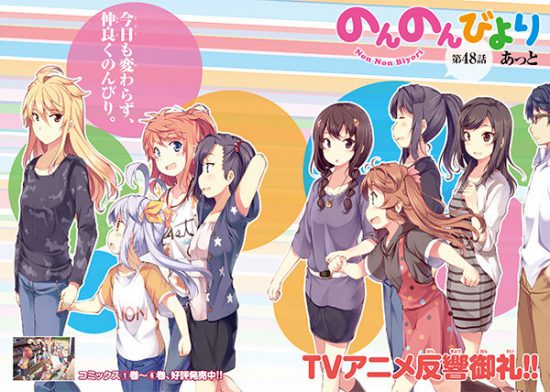 Non Non Biyori Repeat follows the life of several girls living in a small country town. Quiet country life is often compared to an active one in the city. For example, Hika-nee constantly speaks about the way the life goes in a big city, but Hotaru finds real pleasure and fun being closer to nature. The humble life style presented in the animation looks very cozy and attractive.
The action takes place in Asahigaoka – a tiny town in the countryside. The stores are many miles away and there’s only one local school with five students only. The series isn’t filled with lots of events – it’s a quiet and atmospheric story about life of five friends in a tiny place situated not just far away from the busy life of big cities, but also far away from conveniences of people living in them.
The characters are casual children with no special abilities. They behave like kids and talk about things typical for their age. That’s why Non Non Biyori had a very specific audience from the very beginning of its production. 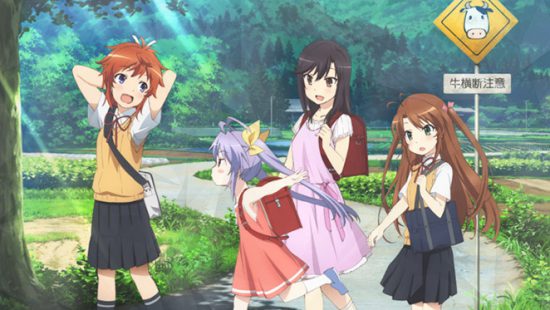 Koma-chan – the eldest out of four friends. Wants to be adult-like, but is treated like a child. Though her mature nature helps her get experience from the mistakes she has made. In the second season she’s passing through a recollection phase. Her wish to look and be treated older than she really is leads her to amusing and confusing situations.
Nattsun the loudest character in the company of friends. She’s determined and extremely energetic. She can’t be called a “proper” girl. But she’s a lot more than just a "reckless" person. It’s clearly seen through the second season.
Renge a perfect typical kid. She’s blissfully innocent often fooled by casual situation and illusions. She’s worried by spontaneous ideas appearing for no reason. She may look kinda awkward, but cute. She’s sensitive and thoughtful though. 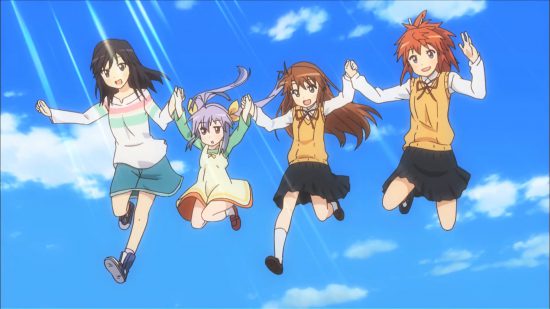 Hotaru is new in the village. She used to live in a big city before. She looks older than she really is, which makes her feel uncomfortable sometimes. She’s quite childish and almost always positive. As the story goes she becomes more and more energetic.
The characters are great as individuals, but they’re great in interaction.

The Release Date of the Third Season

The series gained great popularity for its unique style and characters. We hope that it will continue, cause the creators say nothing about the cancellation of the franchise. Let’s keep our fingers crossed for that! If you’ve got something to add, do that in the comments.