Another anime about feelings and friendship from Kyoto Animation tends to please us with its new episodes this upcoming fall with the launch date of the second season being in the unknown status.

What can be expected from the old good anime developed by the Kyoto Animation studio? Surely, we cannot but mention here an everyday life in school standing as the main theme as well good sounding. 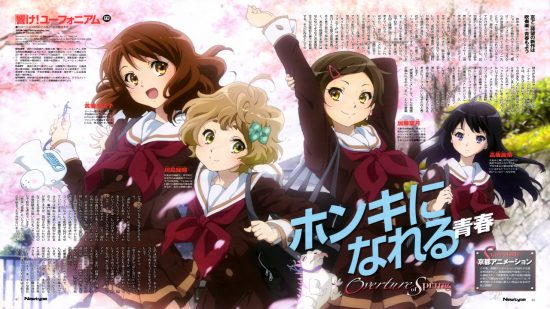 These features are referred to Hibike! Euphonium, the anime series aired on various Japanese channels including the most popular one named Tokyo MX.
Outside Japan, online streaming is maintained by Crunchyroll that is known for a variety of anime series that storm into network each year. The series opening was held in the previous spring. And now only one season is so far available for us to view.

Kumiko Ohmae turns to be transferred to another high school. There she is challenged to make friendship with other absolutely unknown people. Being a talented musician playing particularly euphonium, she is taken into the local school orchestra which used to participate in various international competitions.  With the coach having been replaced by another person, the success of the group faded away. 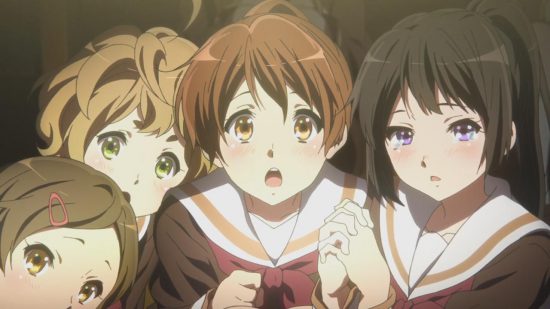 The appearance of Kumiko Ohmae at this school coincides with a new coach joining the musical troupe. So together they are destined to bring a new reputation to the group renewing their competitive tours through the entire world.
As the matter stands, the story is not focusing on the orchestra. It is a light relaxing narrative about relationships, friendship, conversations with a very sweet depiction of a daily life that attracts watchers to the anime products of this studio.

The anime series is noted for perfect artwork and well-developed characters. Together with picturesque landscapes as well as bright colors in every scene, these advantages are contributing to the favorable reception of the story. So a good writing and methods applied to bring it to life are of a high quality.

In the previous autumn, we became aware of the series revival. But at that moment of time, the Hibike! Euphonium season 2 release date was surely undefined. The premiere was preliminarily scheduled for this past spring. However, our hopes were frustrated with this summer coming to us with its first hot days and also with the spring official announcement that the premiere was shifted to this autumn. In order not to disappoint the anime fans once and for all, the promised feature animated movie Sound! Euphonium the Movie: Welcome to the Kitauji High School Concert Band was released on April 23, 2016. It turns to be some kind of a shortened version of the first season of the series.
So now it is time to keep our fingers crossed and hold out hope that the developers are not intended to make some changes in the launch time frame again.