Are you the gamer of the 1990s? If yes, you will really appreciate the upcoming game under the title “Strafe”. Having Doom as a template, the recently unknown creators are now pushing forward their really inspiring shooter.

What are the developers?

The creators turn to be Pixel Titans, not so widely known studio by the way. The company consists of Thom Glunt and Stephen Raney.  It’s clear that this is a group of people who care deeply about shooting games and know exactly what they are eager to have as a result of their work. 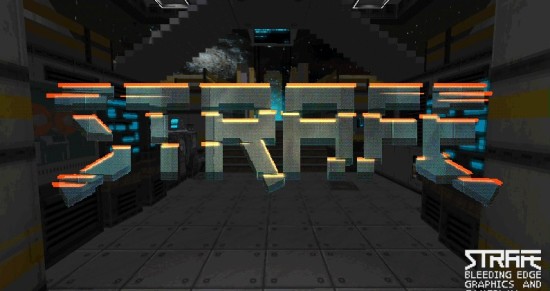 Basic features of the upcoming game

According to the data given by the creators, the game will fat enough to present some difficult moments for completing it. It will be also choke-full of secrets which the player is to explore.
The playing rooms will be created in good old traditions of the beloved Doom franchise. They will remind you indie platformers that ascend from the 90s of the previous century. The simplicity is going to be the principal aspect as well the benefit in their point-of-views the developers are following while progressing in the production.
The developers are sure that people are seeking for the games arising from the old times like “Doom” and “Duke Nukem”. They are bored by the modern 3D games. That’s why they need a piece of nostalgis to come to them together with the game that will remind them about those times that have seemed to be perfect.
Thus, the shooter is to be overflow with charming characteristics of games released from 1995 year. Surely, the upcoming game will be given a touch of modern installments, as for example like ragdolling and bloom effects. Without them you won’t be able to play it on your PC. It is by the way known that the game will be created also for Mac and Oculus Rift.
The game is to be also of artful aesthetics. There are a large numer of games with a magnificent realism in the picture, however, the creators of this upcoming game are to make the game video realistic. The thing is that they are going to express themselves artistically. This is the point that is to be appreciated by the fans of the old-fashioned games.

How did we get to know about the game?

In the beginning of 2015, it became known that a new old-fashioned game named “Starfe” is going to appear. How did we get to learn about this? The answer lies at the surface. The thing is that everything is about the campaign on Kickstarter on which the game from the first person, specifically its trailer, was nothing but a hit. Critics and common users have referred it to the best trailers in the video history.
And now let’s get to the point of the launch. So when is the game going to come out to crush us with its features? Unfortunately, we are unaware of the Strafe release date. The developers seem not to be sure about this or just whet our appetite in such a way. In any case, stay tuned in order not be notified in time about the release as well as about other breaking news.