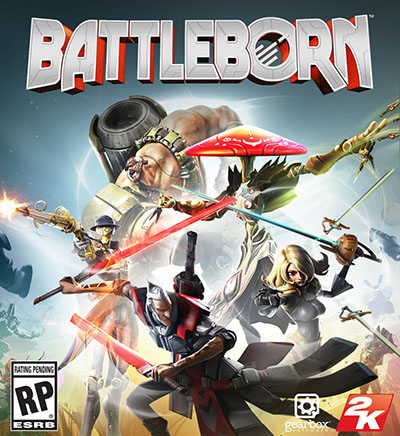 Gearbox and 2K released their highly anticipated project on the 9th of February, 2016. The game is finally available for all platforms including PS4 – yeah, PS users were the first to get the game. The game has been presented at Paris Games Week conference and it’s got a competitive multiplayer mode! It’s a sci-fi action shooter. The shooter has a co-operative mode with an objective for the whole team.

The game is totally crazy – you’ll be playing for a man-mountain, for a vampire from space, for a robotic psychotic gentleman and even for a walking and talking mushroom… Moreover, these characters are not the most surprising in the game.
The game has a wide gear system that is being unlocked in the process of the game. You unlock new and new credits while winning the matches.
Battleborn was criticized for the scenes of violence and harsh language, but it doesn’t make it less popular among the players!

Battleborn is a first-person shooter game. It is stuffed with 25 unbelievable heroes that you can play with. They are truly badass and they are ready to fight in order to protect the only star left in the vast universe from complete destruction.
The game itself is set in the future – it’s a world of technologies, space invasions and robots. No fantasy elves are promised in the plot.
You are going to choose out of 25 unusual and unique characters and demonstrate your power in 5v5 fights in a multiplayer competitive mode!
The game in a capture mode is a classic capture-control action fighting between two groups of characters.
If you use a meltdown mode you’ll have to control the minions and send them to death in order to scrap resources (like metal or ammo).
If you use the incursion mode, you’ll need to protect your own base from the waves of minions wiling to get your resources. At this very moment, you’ll need to control your own minions to destroy the base of your enemy.
Players’ classes are customizable. Every class is provided with a skill tree that helps to choose a couple of skills and develop them. Sometimes the obtained skills are new abilities – new type of grenades or heavier air strikes. You can also modify your character’s skills, like recovery speed or dealing with damage.