Looking at the image is enough to make sure of the collaboration of KAWS and Air Jordan on the upcoming spring release of the new pair of shoes. The familiar ‘X’ stamp on the outsole of shoes glowing in the dark was posted on the Instagram account of the street artist popular among sneakerheads and streetwear connoisseurs. The artist has worked with various brands. Corroboration with Air Jordan is the greatest deal for him, as for now. 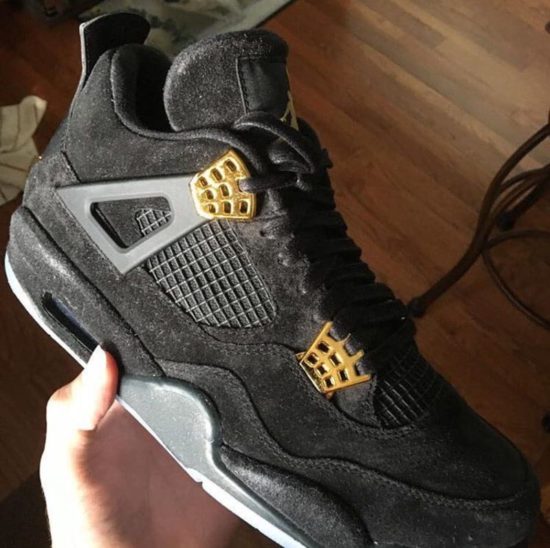 Though it has not been defined formally, what KAWS x Jordan Brand collaboration will be, we can conclude that it will entail a coming KAWS Air Jordan 4, according to the early leaks of information. The official color scheme is called “Cool Grey/White” but as early photos surfacing on Nike Talk say, the training shoes will differ much from his usually brightly colored products. The sneakers will obtain a black suede upper with touches of gold. The sole will be completely translucent with KAWS’ signature X design. Certainly, it is only a preliminary info and something may be altered. On a side note, these shoes are so much similar to the “Royalty” Air Jordan 4 that has come out this month.

No KAWS x Air Jordan 4 release date has been officially announced as of today. Spring 2017 is the exact launch timeframe though it is rumored that the launch is starting from March 1, 2017. Herewith, we make our best to get you informed of the formal news in time.
Don’t be so shy and leave comments in the section below, to inform us of your thoughts regarding the future releases. Stay also on the line for updates!