Today creators often make the films based on the writers’ stories. Viewers have always been interested in such kind of cinema, because the reader is eager to find out if their images arising in the mind suit the idea of the director bringing to life a written story. The movies based on comics are filmed less frequently and an unconditional leader here is Marvel Entertainment Company. But the fans of such stories are being awaited with a surprise: on March 3, 2017 will be released a new picture based on an illustrated novel by a famous American scriptwriter and cartoonist Daniel Clowes. The film will be called “Wilson”, just like Clowes’s comics. The cinema’s genre is a comedy with elements of drama, filled with a deep sense and quality humor. The premiere is about to come out, and soon Clowes’s admirers will know whether it is the same story with the plot, shown on the screen. 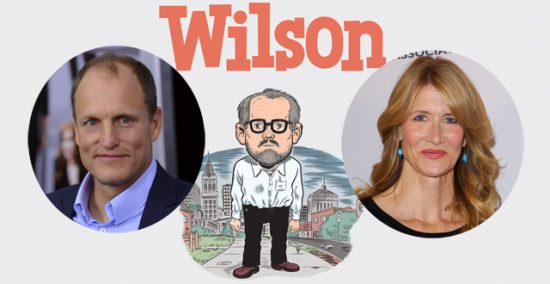 The director of the film is Craig Johnson, who worked with the author of the script Daniel Clowes. Executive producers are Alexander Payne, Jim Burke and Josh Donen. Fox Searchlight Pictures, an American film company, is responsible for the distribution of the movie.
The cast of the film is quite powerful: the main roles are played by Woody Harrelson and Laura Dern. Among the other actors in the film are worth mentioning Isabella Amara, Cheryl Hines and Judy Greer.

The main role in “Wilson” is played by a well-known American actor Woody Harrelson famous for his work in “True Detective” and “The Hunger Games”. His character’s name is Wilson, who is a lonely, prone to pessimism and very honest man of middle age. He and his wife Pippi (an American actress Laura Dern) decide to try their relationship again, and Wilson first meets his own teenage daughter Claire (Isabella Amara), with whom he certainly has some kind of incomprehension. To solve it he does everything he can in his unusual manner, which will not leave anyone indifferent.
The film if full of not only a good humor, but also deep thoughts, so one shouldn’t count on a sparkling comedy, it is better to be prepared for a serious dramatic film, capable of raising serious issues and awaking in the viewers’ feelings. The creators believe that their project coped with this problem and are ready to present the audience their quality work quite soon.

The filming started on June, 2015 in the US, and since that moment it hasn’t been long before the final completion of the project. The rating of expectations of the film is quite high; the creators have tried to make their work be looked forward to by the greatest possible number of viewers worldwide. It’s most likely that “Wilson” (2017) will be interesting not only to ordinary moviegoers, but also to the critics, because the accent in the picture was made not only on comedy scenes, but also on dramatic work of the actors so that true connoisseurs of serious cinema might get pleasure of it too. If the creators are right or not, it will be known very soon.