Tulip Fever is referred to melodrama and drama genres. Justin Chadwick is behind the direction. The script has been developed by Sir Tom Stoppard, basing on the eponymous novel by Deborah Moggach. Tulip Fever release date is already known to us.
The cast is considered a brilliant one with great names under the belt: 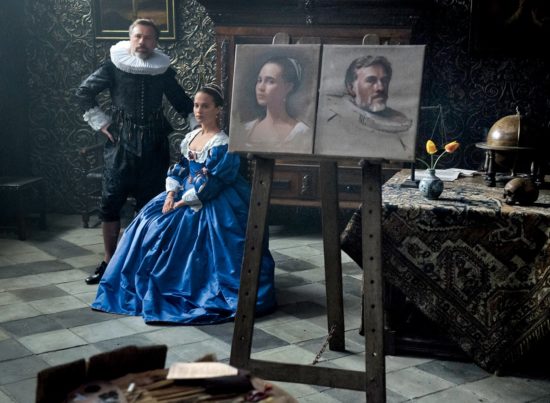 Primarily, the film must have been launched in 2004. Jude Law and Keira Knightley were chosen then to perform the lead roles while John Madden was to direct it. These went another way and the production was postponed following changes in tax rules producing the effect on film development in the U.K.
The filming was finally set in summer 2014, with Pinewood Studios contributing to the project.

The action of the story is dated back to the early 17th century. Those who are aware of the historical events happened at that period know that it is featured for the tulip mania. The main character of the upcoming story is an artist who loses his heart to a married young woman. Her spouse orders a portrait of the apple of his eye.
Being in love with the artist also, a young woman starts a passionate affair with him, as they both understand that they cannot live without each other. To run away and keep on being together, they need to raise a fortune. The best yet risky choice for it is the investment in tulip market. Will they manage to build their future as a couple?

After the decade break, the film was shot and planned to be released on July 15, 2016, yet something went wrong and the postponement took place. What was this “something wrong?” The delay was explained by some rumors that Harvey Weinstein was not content with the final version and the re-editing was the only one choice.
The American-British joint venture has been scheduled for a close release.  The distributing studio Weinstein Company revealed that the premiere date was February 24, 2017. Stay on with us since the arrival of more info as for the movie is still a possible event!