The Great Wall is a project created in a very unpredictable collaboration – Chinese and American filmmakers made it. It’s going to be a really epic adventure film based on fictional events. The director assigned is Zhang Yimou. The script was created by a group of American scriptwriters. The set of actors consists of both American and Chinese actors.
The photography and filming started on the 30th of March 2015. The filming is set in Qingdao, China. That’s the second time when Zhang works in collaboration with Hollywood. Besides, it turns out to be the most expensive Chinese film. 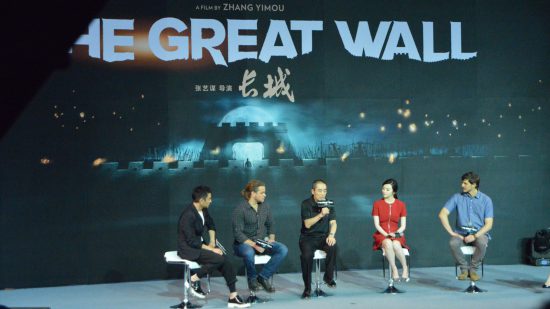 What is it about?

The Great Wall centers attention on the battle for humanity. The main characters here are elite forces making a heroic acts constructing the Great Wall of China.

It started on the 18th of March 2014. Zhang Yimou, a Chinese film director was officially assigned to work on the creation of the epic movie. On the 6th of November 2014, Peter Loehr, announced the official budget for the film: $135 million. That’s the first American film created in collaboration with a Chinese director. The Great Wall is planned to be released only in English.

Zhang says that this film wasn’t a sudden idea – it had been prepared for a really long period of time. This action blockbuster appeared due to a number of requests to develop his original idea. The production of it right now is pretty impressive. The most important thing here is that this American action movie has a lot of Chinese elements in it – that’s what makes it really appealing.
The director also thinks that The Great Wall turned out to be something a bit different from what it was expected to be. The film demonstrates deep rooting into Chinese culture. The film has the largest Chinese cast. This trend looks attractive for the viewers – embracing it into film industry can become a new hit.

To whitewash means to somehow cover up vices, to gloss them over for the sake of omitting serious themes and subjects. It helps to make tragically vital matters a lot less important. It’s like a coat of cheap white paint that gives the surface a possibility to look better for a short period of time, like a quick uniform clean appearance.
In film industry it’s connected with white European and American actors playing the roles of non-white characters. Matt Damon portrays a white character in a film demonstrating medieval China. This made the critics accuse the producers and the crew of whitewashing. Director Zhang says that there was no initial Chinese actor to portray the character that Matt Damon plays.

It started on the 3oth of March, 2015. The filming and photography is mostly done in Qingdao.

Release Date for The Great Wall