The upcoming movie is going to be launched in 2017 yet Journeyman release date remains to be revealed, as of today. With this open issue, the movie is in post-production now, however, as shooting is over.
As for concrete names of personalities behind the development, they are filmmaker Paddy Considine and producer Diarmid Scrimshaw. The first one is performing the lead role. The rest of the main cast: 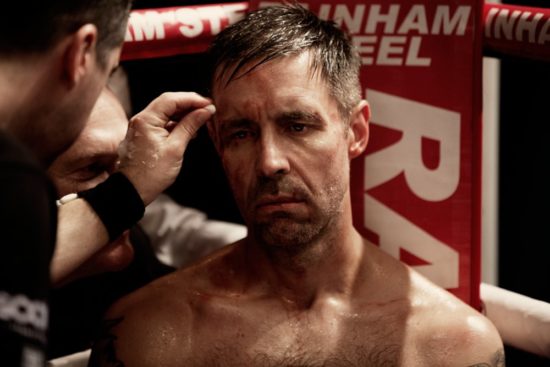 The great contribution is supposed to be made by the players of the supporting roles many of whom are just the freshers in the field of cinematography but they perform parts that reflect their actual professions in the best way, ranging from boxing commentators, boxers themselves to nurses and other medical workers.
The financial issues are resolved by  Screen Yorkshire, Film4, the BFI, the Wellcome Trust, and StudioCanal.

What Will We Deal With?

The agenda is a unique storyline of a struggle with yourself and circumstances that surround you, narrating about a boxing champion Matty Burton who is achieving the line when certain need emerges to finish  his sports career but for this he should make fortune, to secure future of his family, specifically his wife and little daughter.
The fight with Andre Bryte became a fatal a crucial moment in his life, as, after it, he collapses and falls into the coma. However, this turns to be just the beginning since the real struggle is still waiting for the character after miraculous recovering. He suffers from memory while his personality comes to be completely changed. Matty must gather all pieces of his life back again.

With Paddy Considine directing the story, it seems that there should be no reasons appearing in our minds for refraining from the thought about the worthiness of the future content. However, this person has taken on multiple fronts and much brilliantly, as producers note, performing the lead role and writing the screenplay at the same time.
Currently, just the launch frame is defined as 2017. Nothing is said of the concrete release date but we hope for news to appear as soon as possible. Stay tuned for more particulars!