The second part of a fantasy film Iron Sky will come out in the future. The sequel’s name will be The Coming Race.
As some sources claim, the film Iron Sky 2 will be out on the big screens in 2016. The previous chapter came out in 2012, so both the creators and producers had enough time to make a sequel.

The first film is a story about the Nazis who did not surrender after their failure in the World War II. Instead, they set off to the Moon and settled a colony there. Thus, for quite a long time, the Earth’s population did not suspect that their planet’s satellite had an Empire of Evil, the Fourth Reich, growing in strength. Now, it is strong enough to threaten the peace.
In the upcoming movie, the creators decided to go even further. The story leaves a lot of room for imagination. They made their Nazi Moon colonists have an army of prehistorical reptiles on the half-destroyed Earth. 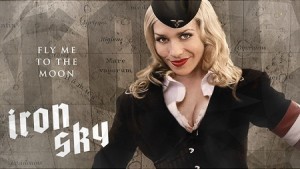