Guillermo Del Toro, a film director who has already become iconic, is up for something new and interesting again. Crimson Peak is a title of his upcoming movie, which is a topic for discussion by both fans and random cinema-goes.
The script for the film was written by Guillermo Del Toro himself in cooperation with Matthew Robbins. They have been working on it since the release of a 2006 film Pan’s Labyrinth, and managed to sell it to the Universal company. After that, the director (and writer) has put aside his work on this project to make some space for the Hobbit movies, Hellboy 2: The Golden Army, and Pacific Rim. While doing the latter, Del Toro discussed the possibility of releasing the Crimson Peak movie with Legendary Pictures.
As for the main cast, Emma Stone and Benedict Cumberbatch were supposed to play the main characters in Crimson Peak. However, they quit the project before it has even started. Their places were taken by Mia Wasikowska and Tom Hiddleston. Last April, the filming has began with these two stars. 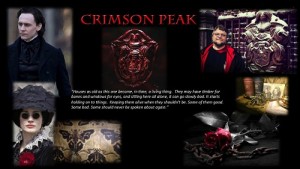 The film’s plot tells the viewers the story taking place in England, in the 19th century. In the center of it is a young female writer named Edith Cushing, who grows suspicious of her husband – he seems not the man she has known him to be.
Crimson Peak will be out on screens in mid-October, 2015. Its release date for both DVD and Bue-ray carriers will follow shortly; the film will be available for home view in November this year. At the same time, Netflix will make it accessible only in 2016.
Are you excited about the new Guillermo Del Toro movie?