As the release date of the Captain Marvel movie has been announced, it is only left to wait three more years for the superhero adventures. What will the plot be? Whom will we see? What kind of threats will the superhero be facing? All these questions are yet to be answered.
As for now, some of the information has been revealed during the Marvel Cinematic Universe conference in 2014. The company’s representatives assured the impatient fans that the new film is now in production. It will be the first installment of the Phase 3 movie series and the first chapter of the story about the superhero called Captain Marvel.

Who is Captain Marvel and what do the viewers know about him?

Apart from saying that the superhero is particularly strong and fearless, we need to make a side note – she is a girl. The first Marvel’s female superhero character to have her own movie is known to her immediate surrounding as Carol Danvers. She works as an Air Force officer, a superhero-like position indeed. It was an accident with radiation involved that has given her the superpower and made of her a human hybrid ("Cree"). 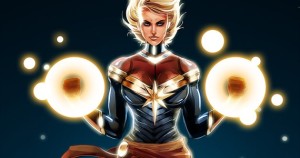 Throughout her history as a Marvel character, Carol Danvers has changed her name several times until she found the most suiting one, Captain Marvel. At first she was known Ms. Marvel, then Binary and Warbird. Her last name has stuck to her, and it corresponds with the upcoming movie’s title.
Captain Marvel is a powerful rival. She is capable of almost magical things, with no magic involved, such as accumulating energy in her hands and forcefully releasing it. Due to her 6th sense, she can predict the future. Of the standard pack, there are supersonic speed, toxic immunity, great strength, and, of course, flying.
The Captain Marvel movie will be released on July 6th, 2018.
How do you think this girl character will fit into the masculine realm of superheroes?