The rumors concerning the release of the Anchorman 3 films are crawling within the cinematic community. Almost 10 years have passed before the third movie finally started being talked about.
A wonderful satire, which any Anchorman movie happen to be, is a matter of discussions among the fans and producers alike. The main film’s cast, Will Ferrell and Christina Applegate, have been expressing their opinions on such a delay in a decade. Christina Applegate, for example, said she would make the third film much earlier, while Will Ferrell said something about the upcoming film being a matter of communication for decision makers, and that a lot depends on what the product will be like during its production. In his interview to E! News, he expressed a belief that the Paramount company will be going for the third movie. It seems that Ferrell is enjoying the Anchorman story. The second movie had a great script, in the actors’ opinion, which is why they starred in it in the first place. A compelling story is also what attracted the audience. So it is still unknown why the Paramount company waited so long before making a decision of some sort. 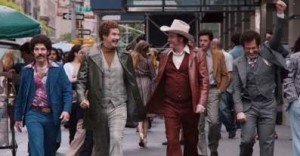 During the promotional campaign for Anchorman 2, Will Ferrell paid visits to various TV shows and made appearance on a range of gigs. For example, he performed "Ride Like the Wind" on Jimmy Kimmel Live! talk show as his film character named Ron Burgundy. Apart from that, Ferrell did a lot of singing and music performances. He played in the company of Robin Thicke, sang particularly to Rob Ford, the chairman in Toronto, on the Conan O’Brian show, and performed an a capella version of "Evening Delight" in the US and Australia.
While Ferrell plays a charming fool on shows, he will assumingly star in Anchorman 3 in 2017.
How about you? Would you like to see the third chapter of the famous movie?