Fallout 4 release date was announced during the press conference of Bethesda at E3 show. Check the revealed details about Fallout 4 premiere below.

Fallout 4 release date was announced by the head of project development Todd Howard at E3 2015. The final part of the press conference was devoted entirely to this Bethesda’s highly anticipated RPG. The company has showed gameplay and talked about the game’s other details.

The plot of Fallout 4:

Fallout 4 will begin with the explosions of nuclear bombs, irreversibly change the world. First, we demonstrate the process of creating a character – this time he made a scene in the bathroom, where a couple in love standing in front of a mirror and discusses his plans. The family idyll is interrupted by a message on the radio informing about the threat of war. The main character, incidentally, will be presented – for the first time in the history of the series.
According to Howard, the work on the design of Fallout 4 began immediately after the release of the third part. "During the last four years we have worked hard to create something special," – he said, pointing to the example of invisible control panel, as the authors are careful to detail.

When Boston turns into a lifeless wasteland, the player begins to study and eventually meets a companion – the dog shown in the first trailer. She can give different commands, for example, in order to move a given point, or bring items. 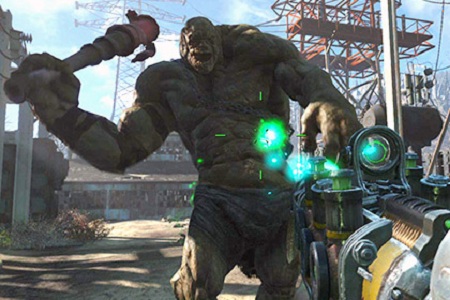 In Fallout 4 it will return to the combat system of VATS, which was shown during a fight with mutated rats. The fight can be put on pause to select a portion of the body by which you want to make a hit or shot.
A real in-game device called Pip-Boy that will be included into the Collector’s Edition. However, it will only be a framework in which you can insert your smartphone and download it to a special application available for iOS and Android.
The research of Boston and the shooting will not be the only thing in Fallout 4. Players will also be able to equip their territories, collecting in the world of the game thousands of materials and using them for building fortifications and turrets, as well as the creation and modification of weapons and armor. The number of possible modifications counts several hundred so that the gap in the world of Fallout 4 will be a long time play.
Fallout 4 release date is scheduled for November 10, 2015.