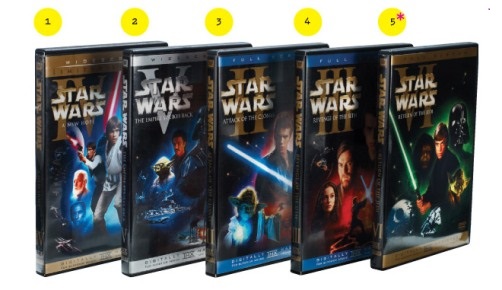 What is the correct order to watch Star Wars if you are have never watched a single movie from this cilt sci-fi franchise? Let’s find out from the experts.
Star Wars is a cult sci-fi saga that was produced and directed by George Lucas in the 1970s.
An epic saga includes six movies that tell the history of Luke Skywalker, a member of the Jedi Order – mighty warriors who have a special power “Force” and about one more man who used to be Jedi but then came to the dark side of the Force and become the Sith Master – Darth Vader.
6 epic films – two trilogies make the Star Wars franchise: the original trilogy (episodes 4, 5 and 6) and the prequel (episodes from 1 to 3).
The first movie appeared in 1977. The seventh episode of "Star Wars" will be released in 2015.
According to the chronology of the story, the first movie was the fourth episode with the subtitle "Episode IV: A New Hope." The film’s budget was $ 11 million, and the box office exceeded $ 775 million.  After this film came out the following two parts of the trilogy – "Episode V: The Empire Strikes Back" (1980) and "Episode VI: Return of the Jedi" (1983).
In 1999-2005, George Lucas shot the prequel trilogy, consisting of three films: "Episode I: The Phantom Menace" (1999), "Episode II: Attack of the Clones" (2002), "Episode III: Revenge of the Sith" (2005).
The most famous quote from the "Star Wars" – “May the Force be with you”.
In addition to movies, the universe of "Star Wars" includes books, comics, computer games and other. "Star Wars" had a huge influence on modern popular culture, particularly under the influence of the religious epic appeared for Jedis.

What is the correct order to watch Star Wars movies?

The question of whether the order in which the episodes are worth watching "Star Wars" to someone who is just starting their familiarity with the motion picture epic, causing heated debate among fans of the tape.
There are two options:
1) If you want to watch movies in the order they were released then watch in such order of episodes: the 4th, 5th, 6th, and then – the 1st, 2nd, 3rd ones.
2) If you want to follow the correct chronology of the history of the story itself, the order changes: watch movies progressively starting from the 1st episode and finishing with the 6th one.
Here is the tip how to watch the Star Wars movies:

It is believed that the original trilogy (from the 4th to 6th episodes) is much closer in spirit and visual range for those people who were born the 1980s. Therefore, fans of advise: if you are over 25-30 years old, dating from the start of the universe of "Star Wars", choosing the first option to watch,  if you are younger – the second one!
Have a great time! A long and interesting journey waits ahead! May the Force be with you!