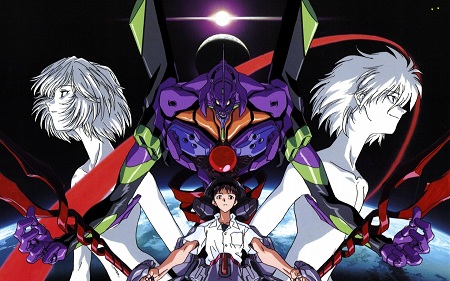 If you a fan of anime TV shows and manga, then you are aware of Evangelion. It is a huge franchise with many chapters and TV episodes. Below you can find out what is the correct order to watch Evangelion.

Evangelion (Japanese title is ? ?? ? ? ? ? ? ? ? ?) – this is anime series created at first in 1995 by Hideaki Anno his along with the studio Gainax.
The action takes place in 2015, fourteen years after the Second Impact, the cause of which, according to the official version, was the fall of a giant meteorite that destroyed two-thirds of the world’s population and rejected the planetary axis. Survivors managed to restore communication, supply and eliminate the main damage. Events series begins with the fact that the city of Tokyo-3 is attacked strange creatures called angels. Conventional weapons useless against the Angels and the only means of protection and counter are biomechanical machines created paramilitary organization titled as NERV – Evangelion (Eva).

Although the series starts as usual mecha anime, the focus is then shifted from combat scenes to the memories of the characters and their relationships, especially centering on the main character Shinji Ikari, the pilot of Evangelion-01.
In 2015, the third angel suddenly appears and attacks the headquarters of NERV in Tokyo-3. To repel these attacks NERV is ready to use Evangelion or Eve – huge humanoid robots. But to control such robots can only specially selected institution MARDUK people. The only pilot of NERV – Ray Ayanami – was injured and could not fight with the angel. At this time in Tokyo-3 comes Shinji Ikari – son of Gendo. Shinji saved from the destruction from the Angel in the city and meets with Misato Katsuragi. Misato drove the Shinji to NERV, where his father worked. 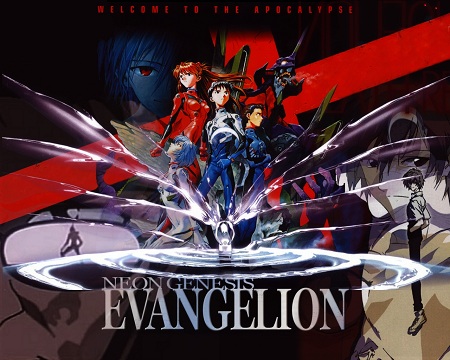 The plot of the following animated movie The End of Evangelion and the plot of the series differs in the end of the 24th episode. The 25th and 26th episodes show an abstract introspection psyche of characters, especially of Shinji. The ending of the movie leaves space for different interpretations: it is obvious that Shinji at some point overcome the problem of co-existence with others and his willingness to come to live with them, but chose to promote humanity and whether there is any artificial evolution remains unsolved directly.

Manga is based on the series, the author of which was the character designer of TV show Yoshiyuki Sadamoto and it was published by Kadokawa Shoten. It describes the same story, but just in terms of Shinji Ikari. Additionally, some events were changed. Currently, the manga is still not finished, despite the fact that the first volume was released along with the first series of Evangelion.

3) 1997 – Death And Rebirth movies – this is the compilation of scenes from the original series in 1995, and comprises as the first part of the movie The End of Evangelion. It is in addition to those fans who already watched NGE and EoE. In Japan, Death And Rebirth has been created and released on DVD before The End of Evangelion. In other words, Japanese fans at first watched Death and Rebirth and then EoE. We recommend watching this movie after you look NGE and EoE.
Rebuild of Evangelion – the common title for few animated movies that serve as the remake of the classic Evangelion series:
4) 2007 – Evangelion: 1.0 You Are (Not) Alone
5) 2009 – Evangelion: 2.0 You Can (Not) Advance
6) 2012 – Evangelion: 3.0 You Can (Not) Redo
7) Evangelion: 4.0 Final – yet to be released.
Optional things to watch if you are a fan of Evangelion:
Chibi Eva – this is the parody of the anime series Neon Genesis Evangelion, the story is based on everyday life of characters, attending high school in Tokyo-3.

Some fans recommend watching original 24 episodes of the NGE and then move to watching The End Of Evangelion movies, that completely replaces the original 25 and 26 episodes of the show.
The plot of the movie The End of Evangelion continues the events of the 24th episode. Since the 25th and 26th episodes were different from the others that have a specific scene, psychedelic drawings and static shots, they can be viewed separately.
Gainax on its website claims that The End of Evangelion is just another end of history and that you need to watch Evangelion in the chronological order: first watch 26 episodes NGE, then watch EoE and DaR. Also note that the end of the official manga in the NGE universe is also different from the other endings used in the movies and TV series. In the interview in 2007, before filming Rebuild of Evangelion, the director said that Evangelion will be shown in new ways and finally will have their story and get his end.

Therefore, you need to watch Evangelion series, because each has its own adaptation of the end.

In what order to read Evangelion manga?

5) Evangelion: Ikari Shinji Ikusei Keik
6) Evangelion Gakuen Datenroku
That is the complete guide to the viewing order of Evangelion and also the order to read manga – official and third-party series.
Did you like our Evangelion viewing order? What is your opinion on the chronological order of watching Evangelion?