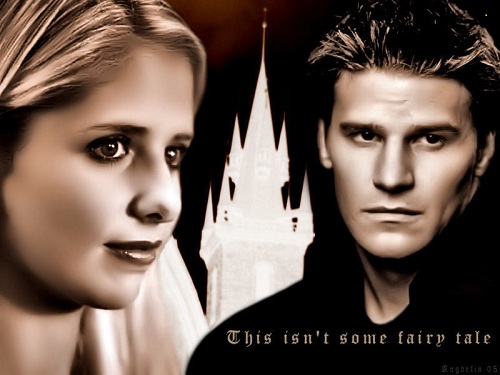 In a case, you are interested in Buffy/Angel verse and what is the correct order to watch Buffy and Angel, this article will be very useful.

Many fans of the latest Joss Whedon works with Marvel want to know about its previous works. By right the most prominent work of Whedon apart from The Avengers and Firefly, was his first serious TV project – the franchise joining two TV shows in the same cinematic verse – Buffy The Vampire Slayer (1996 -2003) and Angel (1999 – 2004).

The history behind the Buffy verse:

Before posting the information on Buffy/Angel viewing order, we’d like to explore the verse of these two amazing shows. At first let’s start with Buffy since this show appeared three years earlier than Angel.

Buffy The Vampire Slayer is an American youth television series with Sarah Michelle Gellar in the title role of the fate of the American girl having superhuman powers. The series was created based on the feature film of the same name in 1992. Starting as a comedy horror TV show, every next season of the show was becoming darker and more dramatic one. The slogan of the show is “Fight evil, bring Buffy home”.
The short description of the major storyline (SPOILERS):
A high school student Buffy Summers (Sarah Michelle Gellar) moved from Los Angeles to the small town of Sunnydale. No one knows that Buffy is not a simple schoolgirl, but The Chosen One, The Vampire Slayer who has the super power to fight with vampires and evil forces lurking in the dark. However, this general lack of knowledge does not last long, very soon Buffy is meeting with Mr. Rupert Giles, the school librarian, who is a personal  watcher sent to train her and to help her become the real Vampire Slayer. Along Giles and vampire slaying, Buffy has also survived through the regular “horrors” of high school. 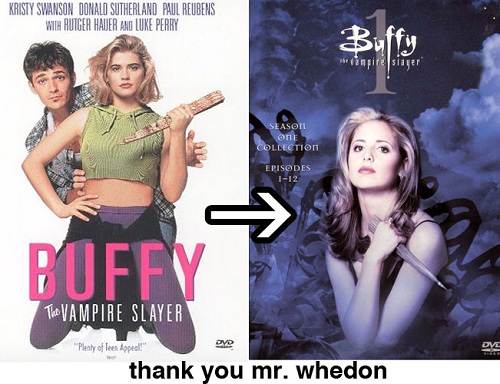 Season 1
Buffy became friends with the excellent student Willow Rosenberg (played by Alyson Hannigan), who is fond of magic and a typical school loser Xander Harris (Nicholas Brendon) who is a friend of Willow. She also meets the only vampire with a human soul called Angel (David Boreanaz). They will help Buffy fight the forces of evil, but above all her friends should avoid opening the gates of Hell’s Mouth and the release of the very dangerous vampire – Master, who is busy searching for The Anointed One – a mediator, who will become a key figure in the upcoming rise of vampire race.
Season 2
Angel tries to help Buffy in the fight against evil, while approaching and moving away from the girl – obviously being attracted them to her, but the past of this vampire (ancient Gypsy curse) does not allow him to be in love with Buffy who doesn’t understand the reasons of rejection.
Emotional intimacy between Buffy and Angel reaches its peak and Buffy spends the night with the Angel. She did not realize the danger that now threatens her and the world: according to the Gypsy curse, a moment of true happiness for Angel makes his soul disappear and return him to the sadistic vampire he used to be – a bloodthirsty demon Angelus, who is seeking the way to destroy the world. Two old “friends” of Angel from his former life – cruel Spike (James Marsters) and Drusilla (Juliet Landau) appear to bring even more mess in Sunnydale.
Season 3
Experiencing the loss of a loved one, Buffy is fully committed to the extermination of all vampires near Hell’s Mouth. So far it has not been in Sunnydale, friends "take care" about vampires, Buffy temporarily leaves the house and moves to LA. In the city appears another Slayer named Faith (Eliza Dushku). She quickly became friends with everyone, but soon Buffy realizes that Faith’s boundaries between killing vampires and humans do not exist, that her thirst to kill is more than just the performance of Slayer’s duties. Angel returns from Hell and takes his soul back.
After the third season of Buffy The Vampire Slayer, Angel leaves Sunnydale and starts a new life in Los Angeles along with another popular character of the show – Cordelia Chase (Charisma Carpenter). Together they start a detective agency and begin the spin-off TV show simply titled as “Angel” (for the short description of all Angel seasons look a bit further).

Season 4
Buffy, Willow and her boyfriend Oz (Seth Green) go to college, where all the problems faced by first-year students. Buffy is not particularly lucky with her roommate, who later turned out to be an evil demon.
Buffy meets a charming undergraduate Finn Riley (Marc Blucas) who is working for some organization called "Initiative", which aims the destruction of the demons and other evil spirits. The organization is headed by Professor Maggie Walsh, who taught psychology at the university. Riley and others out of their squad are under the guise of an assistant professor, they live as regular students in the dormitory, under which there is "Initiative" is located. Riley begins to show sympathy for Buffy. Gradually, their relationship begins to develop into a passionate affair. Willow has a new relationship with Tara (Amber Benson).  Xander dates Anya – a former demon.
Season 5
In the life of Buffy appears her younger sister Dawn (Michelle Trachtenberg), it seems that it has always been there, but later it has been revealed that her sudden appearance is a sort of a mystery. In Sunnydale appears a certain goddess Glory who is seeking a mysterious energy "Key". In this way, the "Key" is Buffy’s sister Dawn created as a human being by monks. The “Key” can open the gates of the another dimension as well as other dimensions. Opening them means that demons will no longer stay kept in their dimensions, the Apocalypse will come to the Earth. Buffy finds out about it and needs to take care of Dawn and protects the world. In the end, Buffy has to sacrifice herself to save everyone.
Season 6
Buffy’s friends can’t overcome her death. They almost cannot cope with the surging flow of demons and vampires. Then they decide to resurrect Buffy from Hell. But resurrected Buffy does not seem really happy. At first, she says that she was glad to be dragged out of Hell, but soon the truth reveals – it turns out that friends pulled Buffy out of Heaven. Buffy falls on many domestic problems and by mistake fall into arms of Spike.  Meanwhile, Willow has to survive another loss – Tara is killed by the trio of “super-villains”. 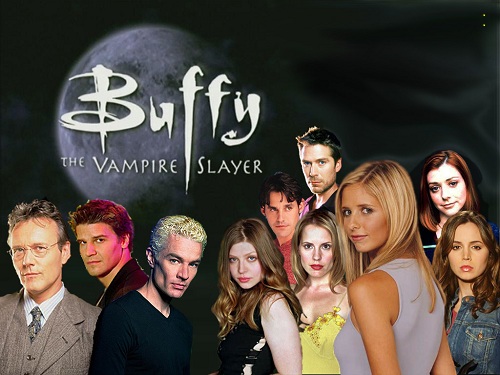 Season 7
Sunnydale City Council built a new school on the place of the old one. Buffy get the work of a consultant in new Sunnydale High. Dawn is angry, Spike is jealous and Willow tries to leave without Tara and magic in her life.
Around the world, the servants of Evil hunt for potential Slayers – women who may be called upon to be the Slayer in the event of the death of the existing one. The Watcher Board prepares new girls to gather the army of slayers when the Hell’s Mouth will open. In the end of the show many tragic scenes will happen including death of some major characters.

Angel is a spin-off of the famous Buffy – the Vampire Slayer TV show. It is recommended to including into vieing order of Buffy Angel and vice versa. The main role is played by David Boreanaz. The script was also written by Joss Whedon and David Greenwalt. The show is telling the story of a vampire with soul and ex-boyfriend of Buffy. Angel and his friends in Los Angeles help people solve their problems in the unconventional ways. 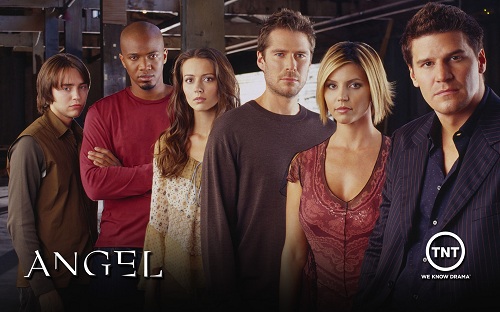 Angel (David Boreanaz) after breaking up with Buffy moved from Sunnydale to Los Angeles. He lives alone, until the half-demon and half-human Francis Doyle (Glenn Quinn) appears. He has developed the ability to foresee the disasters going to happen to certain people. During one of the tasks of Angel meets Cordelia (Charisma Carpenter). The three of them organize the agency to investigate and resolve human problems.
Later Angel will become opposed to the law firm "Wolfram & Hart" that help the murderers and demons all over the world. The company raises Darla (Julie Benz), it comes to a vampire in a dream, trying to relax. Angel is gradually moving to the dark side and dismisses all his friends. They continue to help people without him.
Vampire and cannot be overcome huge corporation vodinochku, so he put up with their friends. They rescue a Woman Fred (Amy Acker) from hell. Comes Willow (Alyson Hannigan) with news of the death of Buffy.
Angel) is depressed after the news of the death of Buffy. He begins to doubt whether it was true he had taken the side of good. After the accident the night with Darla (Julie Benz), she becomes pregnant, but Angel does not want to see her, threatening to kill. Wesley (Alexis Denisoff) reads an ancient prophecy, which says that the child of Angel will play a significant role in the Apocalypse. Darla cannot give birth but allows Angel to cut the baby out of her. The boy is called Connor. 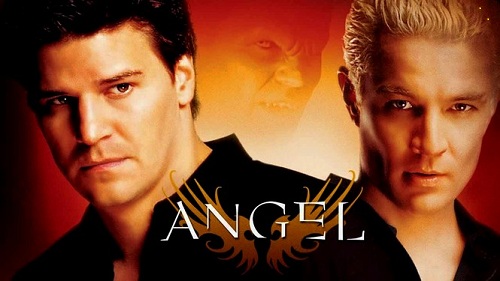 Suddenly there is an old enemy of Angel Holtz (Keith Sharabayka) trying to take revenge on him. He steals a child and goes to the hellish dimension. Later Conner will return from Hell being a grown up already, angry with Angel. Angel has to confront with his son and erase his memory. His friends help him to overcome the loss while working in Wolfram & Hart. In the finale season resurrected ghost of Spike will join the crew to fight the Apocalypse.

In what order to watch Buffy and Angel:

Before reading about the viewing order Buffy/Angel, save the following tab of seasons and episodes:

The first three seasons of Buffy come before Angel’s first season, so you need to watch them first. The last season of Angel was shown after the events of Buffy’s last season.

The 4th and 5th seasons of Buffy were broadcasted simultaneously with the first season of Angel, so it is logical to assume that the correct order of viewing Buffy/Angel is also simultaneous (the more correct order in given in the tab above). However, some subjects are distributed into two or three of episodes of two shows, so it’s best to use the viewing order given in the order.
We believe that while watching Buffy/Angel it is better to watch them separately, because in spite of the common characters, series vary in atmosphere and style, so at the same time viewing order of Buffy/Angel may become the blurry impression of both shows. If you need to follow the chronological order of the shows follows our table precisely. If you want to watch shows separately, at first watch all episodes of Buffy, and then start to watch Angel from very beginning. Do not watch Angel before Buffy.
Did we help to answer what is the correct order to watch Buffy and Angel? Does our table with viewing order of Buffy/Angel help?
What is your idea of watching Buffy and Angel? What order for watching Angel and Buffy would you recommend to newcomers?