Under the Dome, a popular sci-fi TV series based on Stephen King writings, has been extended for the third season. The new episodes are going to be aired very soon, in summer 2015, on CBS. There was an official press-conference, during which the channel’s representatives shared their plans on the Under the Dome TV series.
David Stepfa took the initiative and reminded all who were present at the CBS conference about the nature and the plot of the TV show. The discussion which followed then was in favor for Under the Dome. It is known that the series is based on a recent book by Stephen King (published in 2013), the master of American thriller, a living legend in the writers’ universe. The show has become the number one drama series on the TV not so long ago. 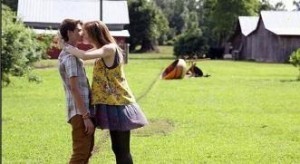 Neal Baer, the Executive Producer of the show, has assumed that if the project continues to be a success, there will probably be up to 15 seasons, which is tremendous news every show’s creators only dream about hearing. Of course, it depends on the ratings among the viewers. In any case, there are lots of curious things to see in the story, which will be enough for 12 more seasons.
The third season of Under the Dome will premiere in June 2015.
What do think of the show? We are very interested in your opinion, especially if you have read the book by Stephen King.