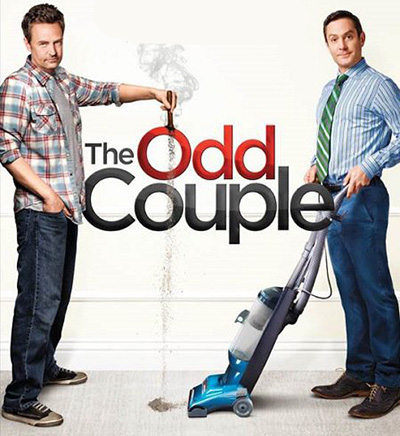 The Odd Couple is quite an unusual American project which first appeared in February 2015. It’s a multi-camera humorous sitcom. The original idea belongs to Neil Simon, who created the play with the same title in 1965. Then there were lots of TV episodes, cartoons and comic strips based on this idea. The upcoming series is a logical continuation of the film “The Odd Couple 2” with Jack Lemmon and Walter Matthau playing the main characters. Today’s TV series is created and developed by Danny Jacobson and Matthew Perry. There was only one season of twelve episodes. The release date of the second episode is unknown yet, but they say that the show is going to continue.

Matthew Perry as Oscar Madison, Thomas Lennon as Felix Unger, Yvette Nicole Brown as Danielle, Lindsay Sloane as Emily and Wendell Pierce as Teddy. Teri Hatcher is going to participate in the creation of the second season.

The protagonists of the show are Felix Unger and Oscar Madison. They meet at college in 1980 as roommates. Felix is always nervous, fussy and irritable. He makes a huge contrast to his new friend Oscar, who is quite sociable, calm and easy going. They become good friends and get married. They manage to find women totally different from themselves – Felix falls in love with the calm Ashley, and Oscar shares his fate with the insecure Gaby. They have children.

Many years passes and the friends’ lives change. Felix becomes a news writer and a photographer. Ashley kicks him out after twenty years being married – eight of them were spent in marriage counseling and two more years Felix was alone. Oscar becomes a host on a sports talk show. Gaby leaves him, cause she thinks his job is not serious. Felix and Oscar decide to live together again as in the good old times. They have to share one apartment again dealing with mutual misunderstanding and differences in character.

After a short period of their unmarried life, the friends start thinking about the way to deal with housekeeping and start thinking about dating with Casey and Emily. They are sisters who share the room with each other in the same building where Felix and Oscar live. Felix is not yet sure that he has real feelings for his former wife Ashley. In contrast to his friend, Oscar feels much better being away from his ex-wife enjoying the single life he received. He also doesn’t pay the alimony and Gaby threatens to take away the kids. He becomes addicted to poker and makes friends with Roy and Teddy.

The Odd Couple was criticized from different points of view. On Metacritic resource, for example, the series received only 42 points out of 100. The rating was based on 30 critics. The Rotten Tomatoes gave a 24% “rotten” ratings, cause the actors were quite pleasing, but the flat jokes spoiled the show completely – they were flat and pretty old.

Matthew Perry on The Odd Couple