Soul Mates is a comedy TV series created in Australia in 2014. The stars of the show are Christiaan Van Vuuren and Nicholas Boshier. Released by on ABC2.
The plot of the series revolves around two friends that are always together throughout the history of the humanity. Every new episode focuses on a new unpredictable story with a humorous setting. In 2014, they portray a couple of Bondi Hipsters obsessed by fashion. Then you’ll see them in prehistoric times experiencing first important steps in life of cavemen. Then they move to 1981 to portray secret agents from New Zealand referred to as Kiwi Assassins. They get to the future (2093) to portray people from a time travel agency – they have to tackle time travel conundrums. When and where will they be in the third season? The creators (as well as the actors) are surely inventing something new and unpredictable. The next season release date is surely on the way.

The creator, director and producer of Soul Mates series are Connor Van Vuuren, Christiaan Van Vuuren and Nicholas Boshier. They are also famous for their successful online projects.

Cavemen. Sticks (portrayed by Boshier) and Rocky (portrayed by Van Vuuren) act as two cavemen, dealing with troubles of prehistoric life like finding women, choosing food to eat and believing in God. They also experience self-destructive habits and ways to behave (spinning and staring straight at the sun). In season 2, Rocky gets back introducing the prehistoric tribe to the ideas of capitalism, democracy, management and money matters.
Kiwi Assassins. The action takes place in New Zealand. Terry Thinge, one of the protagonists, is a possum exterminator (portrayed by Boshier). Mum, the head of Ministry of Defense (portrayed by Rachel House) recruits him and pairs him with Roger Blade, a rugby player (portrayed by Van Vuuren). The first mission they are given is to persuade Russell Crowe leave Australia and get back to his mother land, New Zealand. Next aim is to infiltrate a farm where "Fizzy Milk" was invented. Later, Roger and Thinge infiltrate a school in Australia. A local rugby team beats New Zealand’s one many times in a row. It turns out that school brainwashes Kiwi students making them think they’re Australian. 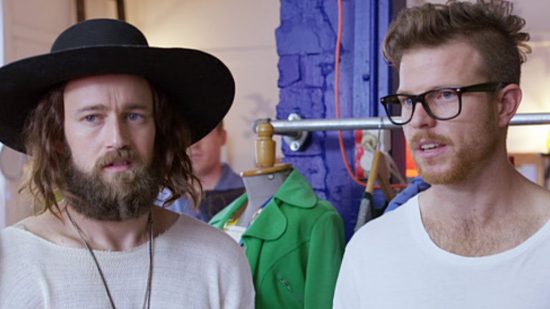 Bondi Hipsters. Adrian Archer nicknamed “Aids” (played by Boshier) and Dom Nader (played by Van Vuuren) are hipsters from Bondi. They create their fashion label seeking for Phoenix (a yoga master) to act as their ambassador. Dom sales vacuum cleaners and does his best to leave it a secret. In season 2, Adrian decides to stop dealing with fashion business. He later finds out Dom’s past secret that shocks him not to say the least.
Time Travel Agency. The main characters are Rob and Dave (Boshier and Van Vuuren) are co-workers at Travel Time Time Travel. Rob gets a promotion and gets back upgraded to cyborg Roboss 2000. Best friends’ adventures result Hitler’s and Jesus’ deaths. Dave also dies.
Ancient Egypt. Seti (portrayed by Boshier) is queen Hatshepsut’s son. He’s also a Thutmose’s brother. His task is to build a tomb for Thutmose. Seti does it together with Amram (portrayed by Van Vuuren), a slave teaching him different useful things.

There’s no official info about the renewal of Soul Mates, but the show enjoys incredible success and stable viewership which makes the renewal quite probable.