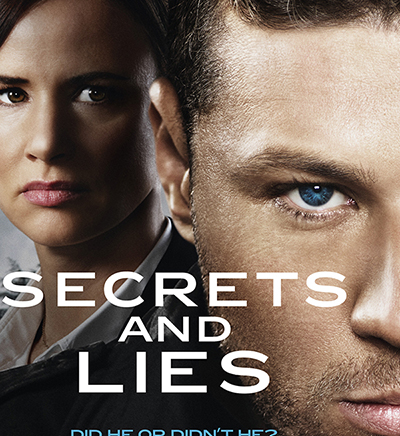 Secrets and Lies is an American version of the Australian TV-series of the same name. It is a mysterious detective story with dramatic line and the atmosphere of a thriller. It is started to broadcast in May, 2015 on ABC. Writer Barbie Kligman and director Adam Arkin attempt to create a worthy story with catching plot and which is being watched easily and discreetly.

As the serial runs like an anthology series, the main characters from the first season differ from the second one. The only connection remains with the detective Andrea Cornell who is appearing in the second part with a new suspect and investigation. Juliette Lewis is acting the detective. She is succeeded to display an incredulous, hard and persistent officer who brings the truth to light at whatever the cost.

The main character of the first season is Ben Crawford performed by Ryan Phillippe. You can remember his acting performances in such great movies as I Know What You Did Last Summer and of course Cruel Intentions. This time he should display a man whom everybody thinks to be a good father and husband but who cares his own secrets and reveals it as well as the secrets of people who surround him.

The second season has its own lead character. Michael Ealy will play a new protagonist Eric Warner. He is known for his play in 2 Fast 2 Furious and Takers. Follow the news about the second season Secrets and Lies release date.

The first episode is about a man finding a dead body of a little boy in the forest. He is doing morning run but after he has seen a boy he has called the police. It turns out that the man whose name is Ben Crawford becomes a suspect of the case. Here comes the problem inside the family, though he had a reputation of an exemplary family guy. Andrea Cornell, a detective responsible for this case, has a tough character and does her best to show somebody’s true colours. She creates more troubles and difficulties for the main character while exposing his reputation and family life to a risk.

In the Fall of 2013 it was determined that Barbie Kligman would be a showrunner of the serial. Nathan Mayfield and Tracey Robertson from the original version are acting as executive producers. The task was to prepare 10 episodes. In one year the American network ABC has taken a project and during 2014-2015 it was aired but only 9 episodes. The last one was shown online only after fourteen months. In the final episode the detective proved that Ben is not guilty.