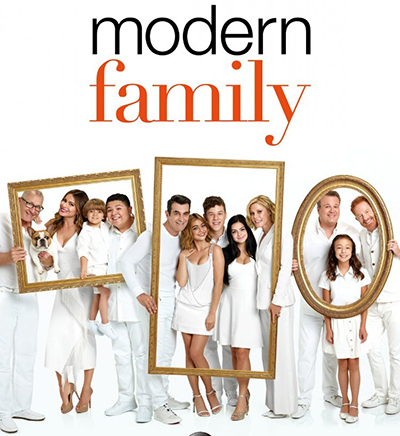 "Modern Family" (Season 8, release date – September 21, 2016) – is a unique mocking documentary series, describing the life and experiences of 3 fairly typical American families. The project was firstly shown on September 23, 2009 on one of the major US channels – ABC.

The pilot brought together so great reviews from critics and audiences, the directors immediately extended the show for 2 more parts. "Modern Family" each year is assigned for the prize "Emmy" as the best project in the genre of comedy, but the victory came only in 2012.

The project`s Main objects  it is an everyday routine of 3 various kins that are typical representatives of the United States society. The 1st couple consists of Jay Pritchett and his spouse. After the divorce Jay organized an incredible party, where he met very beautiful girl from Colombia/ Her name is Glory. Some time passed and they got married. And it is time for Jay to change, because now he has a young spouse.

The next family is the most usual and traditional from all the families in the show. Here we met Phil and Clair Daphne who have 3 children. The relations between parents and children are very tense and Phil is trying to change it but he makes it only worth. His children cannot understand him.

The last pair – it is the most unusual couple. Here we have two married gays: the son of Jay Pritcher and Cameron, who is his friend. They finely achieved their goal and became parents, they adopted a little girl Lilly.

The project shows a great variety of modern families. We can add that the was appreciated not only by TV viewers but also by critics.

For the performing in the TV series actress Sofia Vergara, aka Gloria Delgado has made plastic surgery breast augmentation.

Julie Bowen, aka Claire Dunphy in the show, the wife of a successful realtor. It should be noted that the actress herself grew up in real estate merchant family.

Danny Trejo appears on the screen as an electrician in the 10th series of the second part .

To select the baby-actor for the role of a newborn child of Jay and Gloria, casting- editors have looked more than 1,200 babies.

The 5th part of the project ends with a gay wedding of Mitchell Pritchett and Cameron Tucker. By the way, the role of Mitchell takes Jesse Tyler Ferguson, who is openly gay.