Film adaptation of biographical stories is rather responsible and time-consuming task. In order to qualitatively realize this idea, the creators must not only navigate the biography of a famous person, but also to come up with a plot that will be interesting for the public. The authors of an upcoming drama Victoria and Abdul in this regard face somewhat simpler task, since the book of Shrabani Basu, which has the same name, is taken as a basis of the movie. A new picture is scheduled to be released on September 22, 2017, and this date is already being awaited by the audience loving biographical stories and appreciating qualitative pictures about great personalities.

The cinema Victoria and Abdul is directed by an English filmmaker Stephen Fears, who took the Shrabani Basu’s story as a basis of his movie. In the process of creating the film he was helped by Lee Hall, a screenwriter and playwright also of an English origin. 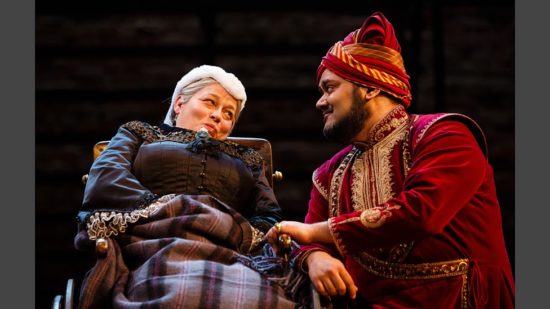 The crew of producers working in the film and promoting its story in mass media includes the following professional developers:

There are a few companies producing Victoria and Abdul; the company which is distributing the movie and has recently announced its release date is Focus Features, a well-known American studio.

A great British Queen Victoria is a famous and important figure in English history. Millions of people respected and valued her, watching her every move, and some just adored. In an upcoming film Victoria and Abdul will be presented not an ordinary story of a rather strange friendship that sprang up between Queen Victoria and a simple Indian clerk Abdul Karim. This subject is described in detail in the book by Shrabani Basu, and now viewers around the world will have the opportunity to see this unusual picture on the screen.
The cast of the cinema contains the following vivid actors:

The film is going to be presented on September 22, 2017, and these terms are unlikely to be changed. The audience is sure to be interested in this story, and viewers around the world are waiting for the premiere with great tension. Stay tuned to know all the peculiarities of Victoria and Abdul and find out additional interesting facts about this movie.