Comedy and drama is always a winning mix. The most serious and horrific life situations are smoothed by a light tint of humor. That’s the best choice for a cozy pizza evening with your friends or family. Rules Don’t Apply is an upcoming project of this genre. The producer, director and he scriptwriter here is Warren Beatty. The cast list is pretty long, you can check this out on IMDb or read further for more info on the casting. The filming started on the 24th of February 2014 in California. The production ended on the 8th of June 2014. The filming took 74 days in total. There was some extra filming in the end of winter of 2015. 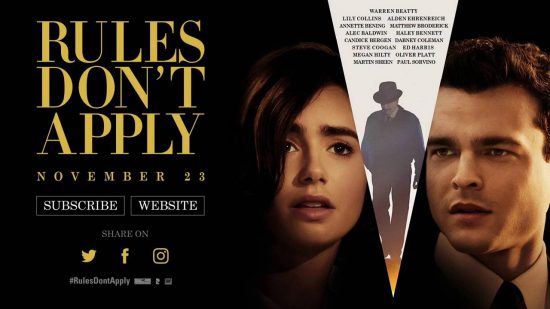 The action of Rules Don’t Apply is set in Hollywood of the 50s. The plot centers on romantic relationship of a businessman and a young actress. However, Howard Hughes, their employer, is the one who’s against it, cause romance between co-workers is forbidden.

On the 22nd of 2011, Beatty announced that he was in search of actors for the cast of his new project. Warren Beatty, the director and the author of the script, decided to play the role of one of the main characters himself. He was going to portray Howard Hughes. He had meetings and conversations with a number of actors.
The initial cast included Alec Baldwin, Jack Nicholson, Evan Rachel Wood, Andrew Garfield, Annette Bening, Shia LaBeouf, and Rooney Mara. On the 14th of November 2011 Felicity Jones was invited to join the cast to portray the female leading character. However, later she decided to leave the project because of constant production delays. For the leading male roles, Justin Timberlake and Alden Ehrenreich were invited. The characters of Nicholson, Baldwin, and Owen Wilson were unknown.

Then, in quite a long period of time, in February of 2014, there was an official announcement about Collins going to portray Marla Mabrey (a young actress), and Ehrenreich going to portray Frank Forbes (her love interest).
On the 27th of February 2014, Candice Bergen was reported to join the cast for the role of the secretary of Hughes, a character named Nadine Henly.
On the 6th of March 2014, Martin Sheen was added to the cast, however, his role is unknown. Taissa Farmiga is going to portray a supporting character. In spring of 2014, Brooklyn Decker hinted that the director wanted her to improvise.
On the 9th of May 2014 Alec Baldwin was added to the cast to portray Robert Maheu, a lawyer. 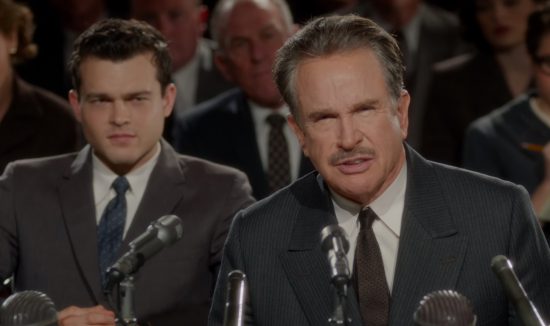 The action takes place in 1958. Marla Mabrey (portrayed by Lily Collins) is a beauty queen and a promising and aspiring young actress. She gets to Hollywood almost together with Frank Forbes (portrayed by Alden Ehrenreich) – a persistent young businessman. They’re striving for success together with their new employer Howard Hughes (portrayed by the director of the film, Warren Beatty). Marla and Frank fall in love with each other, however, the strict rules in the contracts they signed prohibit sex and romance between the co-workers.

Rules Don’t Apply was planned to be released on the 11th of November 2016. However, later the release date was pushed to the 23rd of November this year.