From the trio of French production companies – Les Compagnons du Cinéma, France 3 Cinéma, and Région Ile-de-France – we are already tuned to pay our attention to the new movie about a famous filmmaker and his second wife. Redoutable release date remains unclear so far but it can appear at any moment.
StudioCanal is behind the major distribution together with Cinema. The central roles are performed by  Louis Garrel and Stacy Martin. Michel Hazanavicius quarterbacks the process of the shooting of this romance drama.
How Godard worked was always to taste of Michel Hazanavicius. Herewith, there is no surprising in him having taken on the project to lead it to success. He assures us that it will be not only a drama but also a comedy. 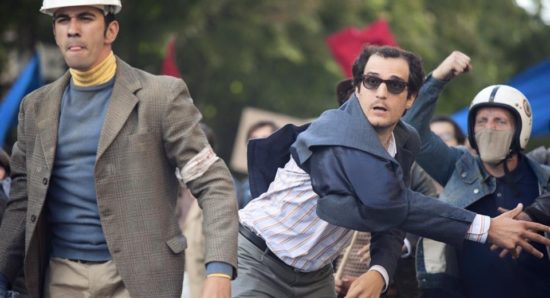 As for the latest works of Hazanavicius, his drama “The Artist” proved in 2011 that it is one his best films when having received the five Academy Awards, including for Best Director and Best Picture. The following project in 2014 which was titled “The Search” was a setback, unfortunately, with poor reception from ordinary audiences and critics. Meanwhile, Godard’s last film was the 3D experimental narrative essay "Goodbye to Language," which got the Jury Prize at the Cannes Film Festival. This inspires us to hope that Redoutable will be a worthy project that will recover the reputation of the cinematographer.

Jean-Luc Godard is an outstanding cinematographer whom we love for such masterpieces as “Breathless," "A Woman Is a Woman," "Pierrot Le Fou," and, in fact, many others. The upcoming movie would centre on a certain part of his life, specifically his second marriage with Anne Wiazemsky with whom he got acquainted while shooting 1967 film "La Chinoise." Later on, they got encountered their life in marriage and then divorced in 1979. To sum it up, it is the must-watched biopic based on Wiazemsky’s autobiography, “Un An Après.”

So far nothing is known of the concrete launch timeframe. We are only aware of that it will be released in 2017. Following the social media page of the director, we can become acknowledged about the updates in time. Follow us, thus, if you want to be in the swim!