Originally known as “Top Secret Untitled Lonely Island Movie,” the film is to appear on June in this anticipated summer. However, now the developers have decided to give the comedy another name, particularly “Popstar: Never Stop Never Stopping”. 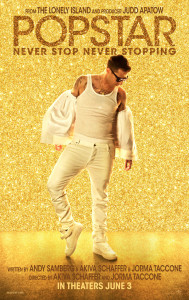 The feature movie is going to star Andy Samberg, Akiva Schaffer, and Jorma Taccone inalterably. Let us remind you that they are famous for their comedy parody shorts with the participation of the best world star (Justin Timberlake, Beyonc?, and others). Their team even has a special name, exactly “The Lonely Island” that is considered now a brand in the USA.
The position of a producer is presented by the blockbuster developer named Judd Apatow, known particularly for such projects as Trainwreck, Superbad, Knocked Up. Samberg, Schaffer and Taccone and as well as Rodney Rothman also are the executive members of the producers team.
The parody movie acting cast also includes Sarah Silverman, Tim Meadows, Maya Rudolph, and many other famous personalities.
Will Arnett is taking the part of a paparazzo, James Buckley as Sponge, a member of the singer’s immediate circle. Joan Cusack is to play the rapper’s mother.
In the comedy, we are going to be pleased with an amazing abundance of real stars, as for instance, Snoop Dogg, Usher Raymond, Questlove, Pink, Carrie Underwood, Will Forte, and many others. They are to be presented as themselves, playing their real role in life.
The directors are to be Akiva Schaffer and Jorma Taccone.
The distributor company is reckoned to be the one and the only Universal Pictures. Thus, the popularity should be gained in any case.

What is about the story itself? 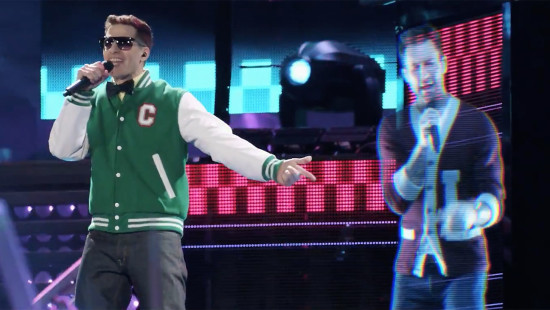 The comedy movie plot centers on a rapper, a principal character, nicknamed Conner4Real (the role is played by Samberg) faces a great challenge in his singing career. A crisis of popularity comes to his life after his futile album complete failure. How can he cope with this crucial challenge in his fate?
Conner4Real makes up his mind to gather their former band with his friends (performed by Schaffer and Taccone). This comes to be the only way out from such a difficult situation. Is this a right choice? To answer this question we should wait for the premiere of the comedy.
The manager of the singer is played by Tim Meadows. We should also mention that Sarah Silverman is also participating in the filming as the singer’s publicist. This means that the viewers can also hope for the classic songs such as “Diaper Moner” to gladden their ears.

Recently Andy Samberg has presented to the fans of the trio a first teaser of the upcoming comedy. The Internet is also full of various posters devoted to renamed film. The Popstar: Never Stop Never Stopping release date remains unchangeable much to the luck of people who are looking forward the musical parody. Let us remind that it is going to appear in American theaters on June 3, 2016.